You smell that? No, it’s not the musk of fallen leaves, nor the stank of a Pumpkin Spice Latte. What you’re smelling is fear. Specifically, little-kid fear. It’s all around, because Halloween is just about here. I don’t do Hobby Lobby Halloween at my house. No silly witches or smiling pumpkins. Shit gets real at the Wilson residence.

I’ve been decorating my house for about 20 years. When I was growing up, there was always some amazing house that went all out for Halloween, and I decided that’s what I wanted to be when I grew up. I wanted to be the Halloween Guy. No real aspirations other than to scare kids one night a year. That’s it.

Every year is a theme. I cover my wrap-around porch in burlap so you can’t see inside, then I go about building the theme. The Exorcist year featured an antique bed (covered in green vomit, of course) that slammed up and down when you walked by. The clown year had a custom-built 4’X4′ jack-in-the-box that launched a clown at you when a motion sensor was activated. Last year was snakes, which included a massive viper that spit venom (well, water) into the poor little trick-or-treaters’ faces.

This year I’m reusing some of my favorite parts from the last ten themes to create a nightmare-overload.

We usually get between 300 and 400 trick-or-treaters. (Trust me, we tally them). Talking to my neighbors, they always get slightly more kids than I do, meaning there are some little ones who simply won’t walk up onto my porch. The best part is I set out a Go Pro to record the night. Take a look here at my highlight reel from last year (theme: snakes).

I’ll give you the final tally and video highlights in my next newsletter. Looking forward to the screams! 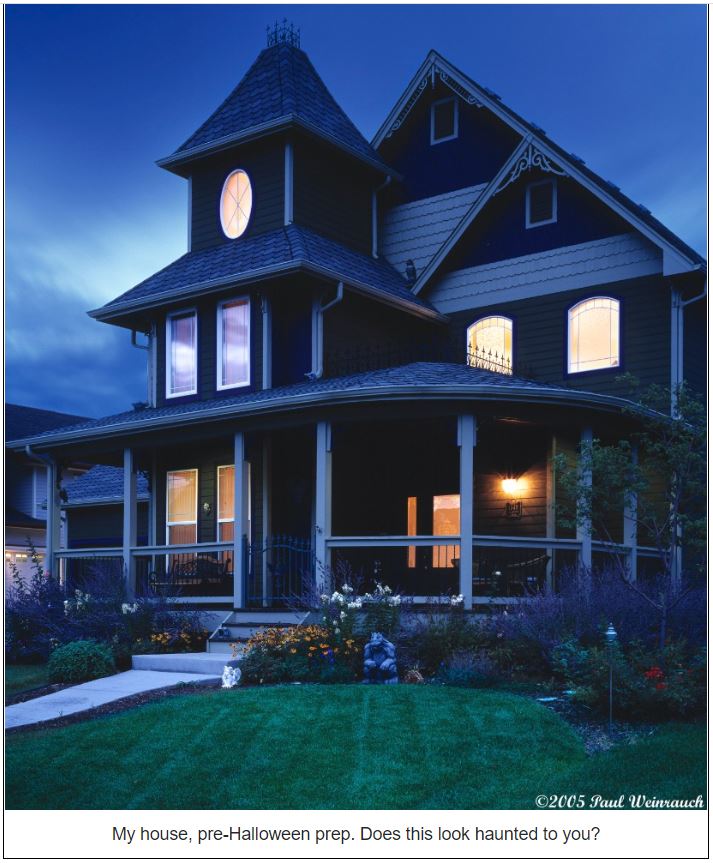 This happened early on in my haunting years. The theme was a creepy circus, and kids had to wind around through a maze in my garage to get to the candy (that’s safe, right?). I was hiding behind a hanging tarp, wearing a full-blown scary-clown costume.

So there was this kid, maybe eight years old, dressed as an M&M. He was with his family, but he strolled into the garage alone. He wound through the maze and reached the door, at which point I stepped out and silently stood a few feet behind him. The kid got his candy and turned to leave, at which point his eyes locked on to me. This little M&M then proceeded to LOSE HIS GODDAMNED MIND. I mean, the screams. I didn’t even try to scare him, I was just standing there. The kid dropped his entire bag of candy, juked around me like a Heisman-winning running back, and bolted out of the garage.

Best part: he doesn’t even stop at where his parents are waiting for him at the curb. He bolted right past them and tore off down the street. His parents had to run to catch him, which was hard to do because they were laughing so hard.

The dad came back, got his son’s candy, and complimented me on my accomplishments. 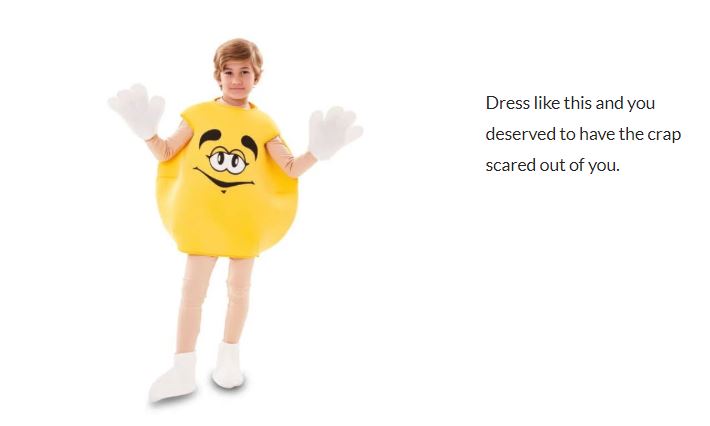 Highlight From My Kids & Cat

I dropped a bottle of red wine in the kitchen the other day. My son and I took advantage of the mess by pretending something awful had happened to the cat, then texted my daughter. She took it in stride. 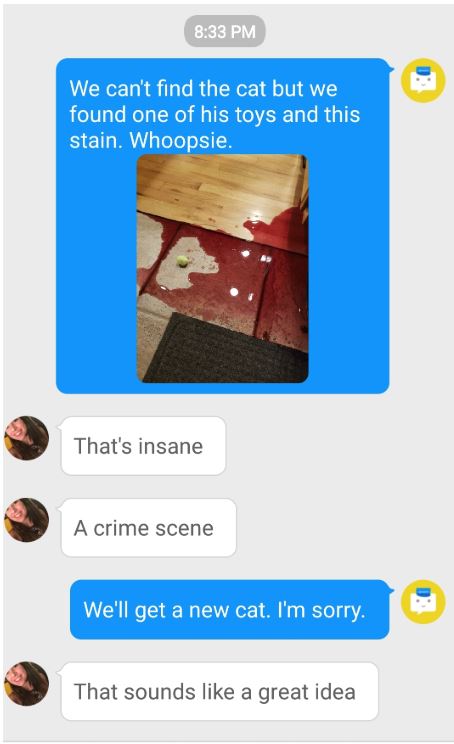 ← Previous post: What happened to you as a child? Next post: Oh, the humanity! My Halloween recap... →