USA Today and #1 Denver Post bestselling author Carter Wilson has written six critically acclaimed, standalone psychological thrillers, as well as numerous short stories. He is an ITW Thriller Award finalist, a four-time winner of the Colorado Book Award, and his novels have received multiple starred reviews from Publishers Weekly, Booklist, and Library Journal. His latest novel, The Dead Girl in 2A, was released in July 2019 from Poisoned Pen Press. Carter lives in Erie, Colorado in a Victorian house that is spooky but isn’t haunted…yet.

The Dead Girl in 2A

Jake Buchannan knows the woman sitting next to him on his business flight to Denver—he just can’t figure out how he knows her. Clara Stowe isn’t in Jake’s line of work and didn’t go to college with him. They have nearly nothing in common apart from a deep and shared certainty that they’ve met before. Despite their best efforts over a probing conversation, both struggle to figure out what circumstances could possibly have brought them together. Then, in a revelation that sends Jake reeling, Clara admits she’s traveling to the Colorado mountains to kill herself, and disappears into the crowded airport immediately after landing.

“Gripping…Wilson provides plenty of creepy and downright disturbing moments on the way to the unexpectedly heartfelt conclusion. Psychological thriller fans will be well satisfied.”
—Publishers Weekly 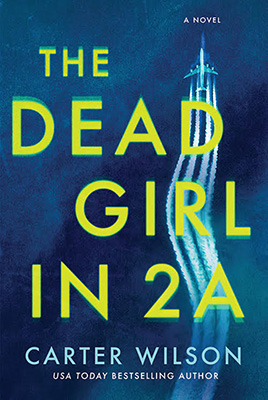