One of the best parts of Halloween is I have guaranteed newsletter content for a quarter of the year. In August or September I write how I’m stressed out that I haven’t yet decided on a theme. In October I reveal the theme. And in November I always provide a recap with a highlight reel of screams.

Previously, I asked all of you to help me come up with a theme, offering an acknowledgement in my next book as a reward. Thank you for all your submissions! Well, not all of you. To be frank, some of your ideas sucked. I asked for themes along with specific levels of detail, including an outline for a major scare prop that tied into your theme. I mean, you gotta earn that book acknowledgement. But alas, I received some emails that just said something like Clowns! Clowns are scary! Thanks, reader from Iowa. Was hoping for something a little more fleshed out. You don’t win.

Other ideas includes a witch’s house, creepy dolls (did it already), The Ruins (horror movie), zombie pirates, Femme Fatales, creepy farm, a Michael Jackson Thriller dance routine (too soon) and syringes (?). Honorable mention to Jo for her well-detailed idea of creating the deck of a haunted ship. Might use that next year! And to Kristen, who very disturbingly suggested I create my own funeral:

There are so many things wrong about this that it almost won. But alas, I didn’t want to spend my Halloween night pointing out to six-year-olds the nuanced ironic beauty of the theme.

“See here, kid, that’s supposed to be me in the casket, and that there’s the ghost of Tim McGillicuddy, who cheated on a biology test in tenth grade and I told the teacher. He always hated me because of that, and then decades later he died of a heart-attack at age forty-five. But now I’m dead too, and his ghost is at my funeral, so really he has the last laugh. Scary AF, amirite?”

I had a few different Stranger Things suggestions, but the one that really resonated with me came from my own sister, Kristin, who detailed out a nice Upside-Down motif a la Season One. Congrats, sis, you win!

This year I’m doing something different. Rather than cover my front porch, I’m using the entire garage to stage my set, which will represent the Upside-Down woods where Will had his Castle Byers fort. And, because I have panic attacks if it’s already October and things aren’t 90% ready, I had the entire staging set nearly finished a couple of weeks ago.

Gotta keep ahead of the curve or my head explodes. My brain is the Keanu Reeves character trapped on the bus in Speed. 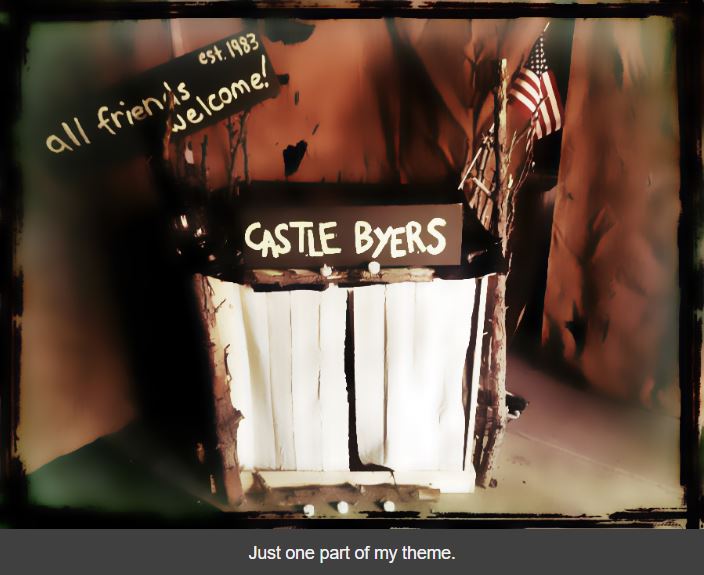 Slade House, David Mitchell (2015, Random House).  A friend suggested I should be reading David Mitchell. Mitchell is the author of Cloud Atlas, and when I think of Cloud Atlas I think of all those books that are deemed works of genius but are actually pretty inaccessible. Also known as books I’ve never finished. This same friend recommended one of Mitchell’s books by saying, “If you can make it through an incomprehensible first hundred pages, the rest is brilliant.”

Still, I wanted to try Mitchell, so I found the shortest books of his I could, Slade House. Holy hell, can this guy write. Slade House is, first and foremost, a haunted house story, but one like you’ve never read before. Without going into plot-spoiling detail, I can tell you Slade House exists in a narrow alley in London, is inhabited by brother and sister soul-eaters, and may or may not be real. Not only is the creativity of this work stunning, but the writing is such that you are forced to read every word. Very few books do that to me, and the last time I read as meticulously as I did with Mitchell (as to not miss any delicious phrasing) was probably Cormac McCarthy’s Blood Meridian. Mitchell’s Slade House is a dark, beautiful tombstone of a novel, and I want to write like him when I grow up. 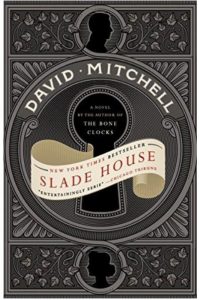 The people who always–EVERY TIME AND WITHOUT EXCEPTION–insist on backing into a parking space. It’s as if they discovered some little secret, and they seem to derive intense joy by navigating their truck (it’s always a truck!) nimbly in reverse into their spot. “Yeah, it’s a little more work to park, but at the end of the day when I’m ready to get to the bar, I just pull right forward while all you losers are wasting your lives by backing out for four seconds and then pulling forward.” 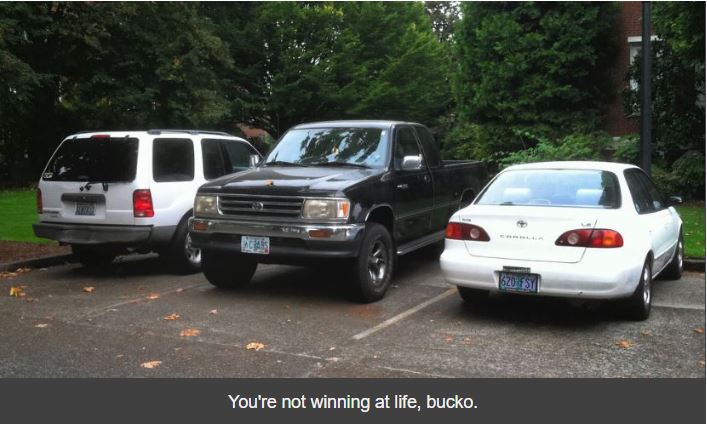 Photo of the Month
Photo credit to Keri Campbell on this one. Keri is a 3rd-grade teacher and I spent some time teaching her students how to craft a scary story. By the end of the hour, turned out they taught me a thing or two about how to be creepy. You spend enough time with 3rd graders and it’s not hard to convince yourself Children of the Corn was a documentary. 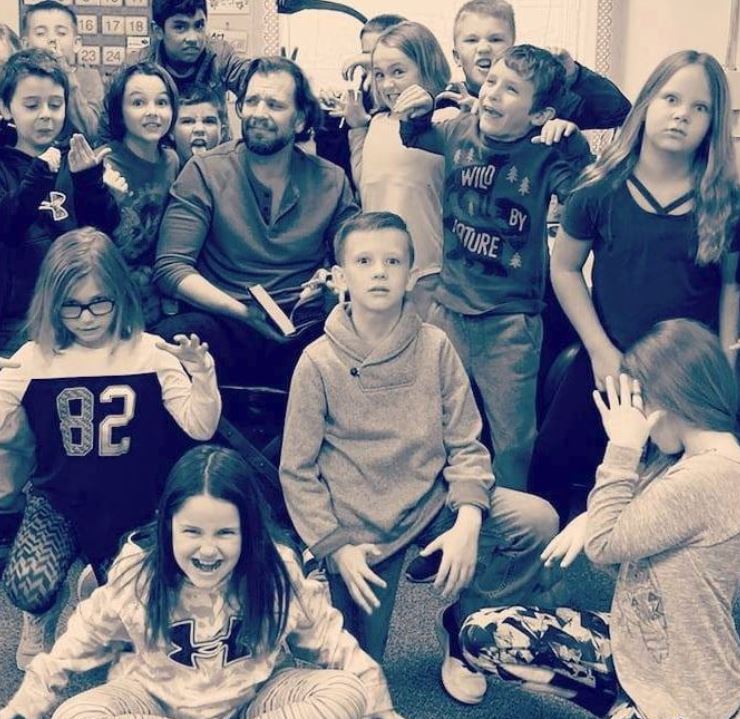 Do you know what sopapillas are? They are little puffy fried pillows of dough, sent down from heaven on the backs of angels. A staple of southwest cuisine, sopapillas are traditionally consumed as a desert. The best part? Dipping them in or filling them with honey.

We were in Santa Fe, New Mexico and my son, Sawyer, wanted to try something novel. He thought the sopapilla might best be consumed by first FILLING HIS ENTIRE MOUTH WITH HONEY. He was wrong.  Fortunately, I was there to video his mistake.

My daughter bought my son a blanket for his birthday. On this blanket is a way-too-large picture of my cat’s face. The cat now has taken to sleeping on the picture of his face, which is very metta.

The following picture, which I insist is the greatest photo any human being has ever taken, is my cat sleeping on a photo of his dumb face. 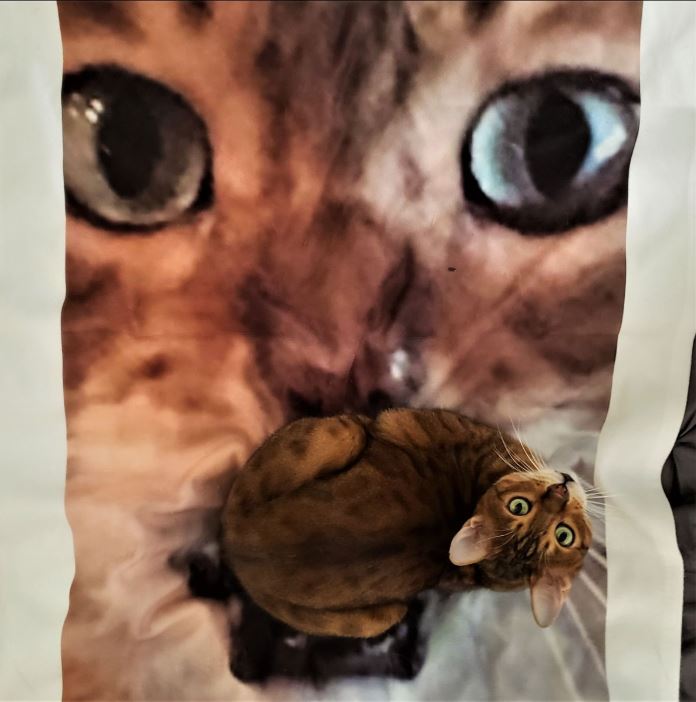