My readers know what I write: dark psychological suspense, sometimes tinged with horror. The space of fiction in which I exist is a cold, barely lit world where paranoia rules and people quite occasionally die—a place where trust is a rare commodity, hope is even more precious, and suffering is a requirement for (but not a guarantee of) absolution.

So people ask: Why so dark? Why not write about happy things?

These questions force me to consider my journey.

To my memory, I had a perfectly normal, suburban childhood: great parents, went to a good university, got a business degree. I was 33 when I decided to write a novel, having no prior experience with such an endeavor. And what I chose to write was dark. Really dark.

I got an agent with that first book, but it didn’t sell, nor did the three after that. But I kept writing and sold the following six books. I’ve pounded out a successful run over the past 16 years, with starred reviews from all the trade magazines, three Colorado Book Awards, and an ITW Thriller Award nomination. And my entire writing career has thrived within the land of the hopeless, the desperate, the violent.

Here is my theory: I don’t think my dark thoughts are any different than those everyone has. When people ask about how I think of such things, I want to challenge them to tell me they don’t have morbid ideas of their own. I know they do, but they just don’t want to make that obvious, lest they be judged.

We all try so hard to hide what makes us stand out, and that’s a damn shame.

Not me. I relish my macabre side, and I love that I can create an environment that scares people, makes them lose sleep, yet keeps them turning the pages. And perhaps my greatest asset is the ability to turn it on and off.

I don’t think about my stories until the moment the laptop is open and my fingers are poised over the keyboard. Then I go into that world, maybe for only 30 minutes or an hour, imagining what happens when I place ordinary folks in extraordinary (and quite unpleasant) situations. I do horrible things to these people, because I want to see how they will fight through it, how they might prevail. I want them to win, I just don’t want to make it easy. Then, as if I might run out of air if I stay under too long, I pop out of my imagination and back into the real world, going about the rest of my day with little to no rumination about what I just wrote or will write next.

My daily writing is a release valve for the pressure of the sinister thoughts that swell in all of us. I strive to spend the rest of my time in a space of joy and gratitude. I meditate. I exercise rigorously. I say “I love you” to my partner and my children all day long. I only look at the news twice a week (this is key). I love any podcast about a person’s journey toward fulfillment and success. I adore all things comedy, and nothing makes me happier than someone making me laugh. I’m constantly seeking to learn new things, and I spend little energy dwelling on past mistakes or future what-ifs. Most of all, I remind myself to be grateful for everything I have—including (especially) my ability to creatively explore within a realm of despair.

My “darkness” just happens to be the side of me manifested in my writing, and it’s therefore the most public side of me. But I contend that’s just how the chemicals in my brain work—and that everyone has some pretty bleak thoughts, most of which stay deeply buried. I sometimes wonder what my life would be like if my joyous side was also my creative side. Would I be writing happy stories? Self-help books? Even romance novels?

But I don’t. I write about murder and mayhem.

And that’s all normal and good.

Last month I wrote about the chance to see my favorite band James play in NYC and even go backstage to meet them (if you’re even a casual follower of mine, you’ll know I’m quasi-obsessed with this band and have included their lyrics as epigraphs in my last two novels). Two weeks after the NYC concert they came to my hometown of Denver, where they hadn’t played in eight years. Of course Jessica and I were going to see them (it was her birthday), and Tim Booth, the lead singer and lyricist, said he was again leaving after-show passes for us.

The day before the concert, around noon, I got an email from Tim saying he’d arrived in Denver. It was surprising enough to get an unsolicited e-mail from the leader singer of the band I’ve been following for decades, but the kicker was this sentence:

Wondered if you wanted to catch a bite in the evening

I had to re-read it a few times. Did he just seriously suggest dinner together? Well, hell, yeah!

So there I was, about seven hours later, picking him up at his hotel and driving us to a fantastic farm-to-table restaurant, where I proceeded to dine alone with my musical/lyrical hero for the next two hours. The conversation was easy-going, personal, and heartfelt; I really felt like I was catching up with an old friend, though perhaps that’s because I’d listened to his lyrics for thirty years. We talked families, writing, politics, religion, and transcendent moments in our lives (of which this was one for me). At the end, I dropped him back at the hotel and drove home in a state of mild disbelief and extreme happiness.

The next day was Jessica’s birthday, and the James concert that night was made all the better by the ability to go backstage and hang out with the band for a couple of hours. Each of the band members was incredibly gracious with their time and Jess and I both engaged in deep and meaningful conversations with several of them. At the end, I had them all sign my personal copies of the two books in which I included their lyrics, and I gave them my own signed copies for their tour bus.

Jessica and I spent a lot of time talking about it all afterwards, and I think what our biggest takeaway from all of it was a deep sense of gratitude for new and meaningful experiences. She said, “I want to do more things like that.” Rather than underscoring the sheer improbability of such occurrences happening often, I found myself agreeing with her. I realized I wanted more life-affirming moments like I’d just had in the past twenty-four hours, and decided the only thing stopping that from happening was my own limiting beliefs.

So there it is. I’m putting this out there in the universe: I’m ready for more crazy experiences. Show me what you got. 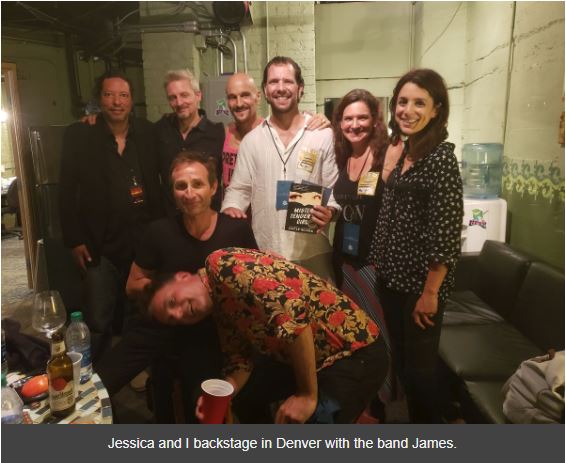 Why We Sleep: Unlocking the Power of Sleep and Dreams, Matthew Walker, PhD., (Scribner, 2018). How is your sleep? If it’s anything like mine it’s a struggle, and I’m often looking for the next big cure. My friend turned me on to this 2018 book, which hit the New York Times bestseller list. In it, Walker breaks down the physiology and psychology of sleep in fascinating detail, coming up with solid conclusions backed by troves of studies. I won’t give away all the conclusions and advice because this book is worth reading in full, but one interesting conclusion I discovered is that nearly every human on the planet needs 7-8 hours of sleep per night to thrive at full potential. There is virtually no such thing as a person who “only needs four hours a night.” I’ve changed some of my sleep habits after reading this book and it’s already making a difference.

Dark (Netflix, 2017-present) It’s a little unfair to review this show as I’ve only watched three episodes (there are two seasons currently available), but it’s left enough of an impression that I want to mention it here.

The Wikipedia synopsis for Dark is both pithy and on-point: “Set in the fictional town of Winden, Germany, Dark concerns the aftermath of a child’s disappearance which exposes the secrets of, and hidden connections among, four estranged families as they slowly unravel a sinister time travel conspiracy which spans three generations. Throughout the series, Dark explores the existential implications of time and its effects upon human nature.”

Yeah, there are a whole lot of WTF moments in this show. This is a moody, brooding, in-your-veins kind of suspense series that has enough twists and fantasy to overcome an otherwise incessant feeling of despair. Picture a production company trying to make a mash-up of Stranger Things and It, then some twisted Germans walk on set and say “hold my beer.” Keenly original, beautifully shot, and portrayed by actors who won’t distract you with their celebrity, Dark is worth adding to any mystery/thriller/sci-fi/horror lover’s queue. And don’t be lazy: watch it in its original German and use the subtitles. 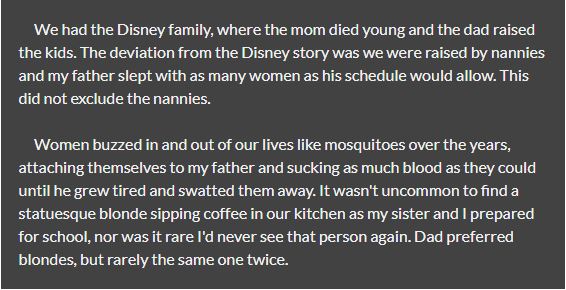 This is Guff trying to relax but also compelled to chitter at a squirrel just outside the window. Really half-ass effort here. 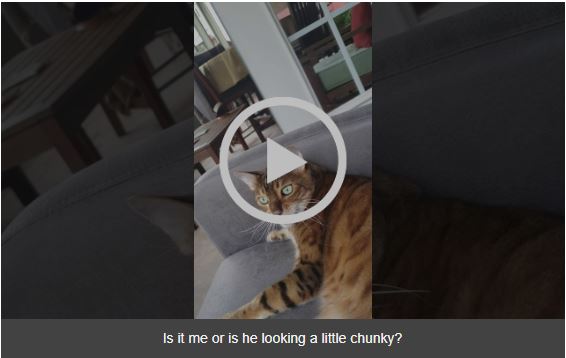 With all the attention I’ve given the skunks and the bobcat, I feel compelled to highlight the presence of raccoons in my backyard. Here’s a gang of them hopped up on cocaine as they bumble about, trying to get a late-night plan together. Listen with the sound turned up high. These things are freaky monsters.