We are one month post-launch of my thriller Mister Tender’s Girl, and I’ve found myself reflecting on my publishing journey quite a bit lately. You see, to publish five novels, I’ve had to write ten. This has consumed a lot of my past decade-and-a-half.

I didn’t start writing until I was 33, and it all began on a specific day fifteen years ago this month.  On that day, I was taking a dreadful, eight-hour, continuing-education class for a real estate license I used to hold. I needed something to distract myself from boredom-induced suicidal fantasies. So I took a piece of paper out and wrote the following question to myself:

I spent the last few hours of the class trying to think of a story to answer that question. Couldn’t do it. So I kept working on it at home, fleshing it out, developing characters.  Writing pages. Plot lines. I had never so much as written a short story nor taken a creative-writing class in my life, so you can imagine the chaos of my efforts.

Yet ninety days later, I had a 400-page manuscript.  That was the moment I stepped back and thought, Maybe THIS is what I’m supposed to be doing with my life.

I’ve learned a tremendous amount about writing and the publishing industry since the day it began, and have experienced oceans of rejection. That first novel didn’t sell, nor did the following three after that. But here I am, on my fifteenth writingversary, seeing my fifth published novel being sold in every Barnes & Noble in the U.S.

It’s been a helluva journey.

And all because I needed to know the answer to that question.

Some highlights from my past….

Book: James Clavell’s King Rat (1962) The brutally and beautifully written story of an American corporal’s rise to dominance within a Japanese prison camp during WWII. I first discovered this story in my early 20’s, and King Rat remains one of the few books I’ve even returned to for a second read. All of Clavell’s Asian-saga novels  (Shōgun, Tai-Pan, et al.) should be on your reading bucket list.

Movie: Vanilla Sky (2001) I was captivated by this movie, partly because it truly keeps you wondering what the hell is going on, but largely because of how Cameron Crowe constructs a film. The camera angles, the color, the light, the perfect choice of music in the right moments. Crowe uses all the elements at his disposal to create a piece ofemotion. By the end, I was surprised to have found myself so powerfully moved by a rather bizarre and jarring little story.

TV Show: Extras (2005-2007) Lasting only two seasons, Ricky Gervais’s show about an egotistical actor reduced to the role of an extra is hysterical. The production contains all the wonderful awkwardness you’ve come to expect from the creator of the BritishOffice. The whole series is worthwhile if only for the Stephen Merchant scene where hebrings a date back to his apartment for dessert, then steps away to use the bathroom.

Stupid Thing I Did

For those of you who’ve read my fourth novel, Revelation, you may recall it centered on four college roommates. One scene had them using a three-person slingshot to launch water balloons out their apartment window. Well, yes, we did that back in college. But then we took it a step further. For some reason, one of my roommates had this four-foot-high inflatable punching bag, and one (drunken) night we filled the ENTIRE thing with water. Must’ve weighed a hundred pounds. So then of course we proceeded to drop it from our third-floor apartment window down onto the college-town street below. Of course we checked to make sure no one was walking by at the moment. But what we didn’t account for was that it was the ten-degree temperature outside, so the resulting explosion of water created a massive sheet of ice in the middle of a steep road. I don’t *think* anyone died.

The first time we realized my cat was a demon spawn was when we found out he could open doors.  He has since used this talent to haunt us at nighttime and to scare the hell out of guests who don’t use the lock when going to the bathroom. 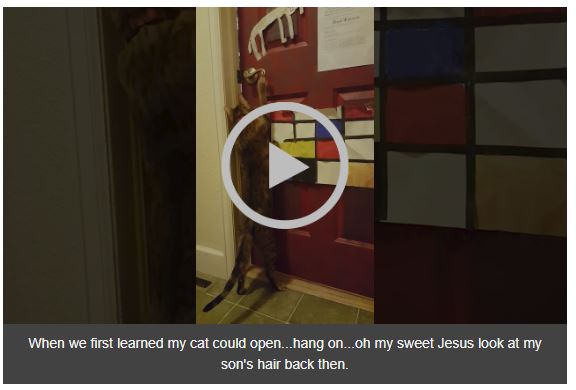 Anyone who follows me on social media has likely picked up on the fact my 14-year-old daughter has a beautifully dark soul. She makes Wednesday Addams look like Hannah Montana.

A couple of years ago I was talking to my kids about scary movies, which then became a conversation about things each of us found scary in general. Sawyer, my son, admitted to being unnerved by “creepy dolls.” So, of course, right before bedtime that night my daughter hands the following note to her little brother. 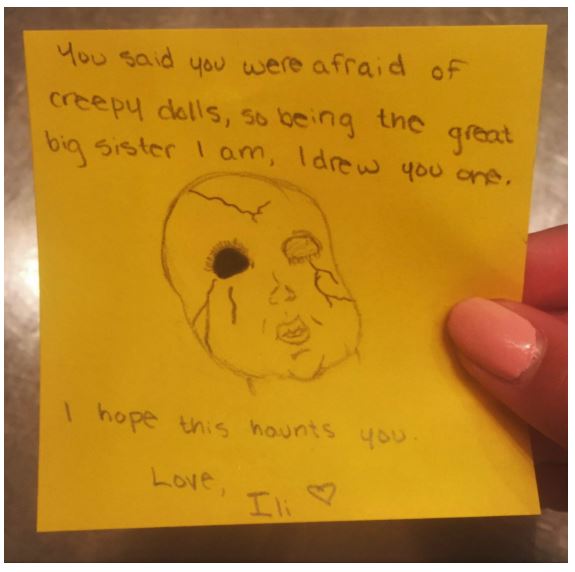