Apr 1, 2020 | Uncategorized, What's Entertaining Me, What's in my backyard, Writing

Jessica and I just got back from our annual ghost-hunting excursion at the Stanley Hotel in Estes Park, Colorado. For those of you unfamiliar with this tradition, for the past six years I’ve gone to the famously haunted hotel to do some writing and search for ghosts, and Jess has accompanied me on the last three occasions. The Stanley is a 142-room Colonial Revival hotel nestled in the mountains, and since it’s over a hundred years old, of course it’s haunted.

The most famous of all haunted Stanley rooms is 217, which was the inspiration behind Stephen King’s The Shining. King and his wife stayed in room 217 in the early 70’s; they were the only guests in the hotel. After an unnerving and sleepless evening, King claims to have fleshed out the entire plot while smoking a cigarette on room 217’s balcony. The room is said to be haunted by Mrs. Wilson, a chambermaid who was injured in a gas explosion in the room in 1911, and many guests report finding their belongings unpacked or their items rearranged.

Room 217 was the only “spirited” room in which we hadn’t spent the night. Until this year. 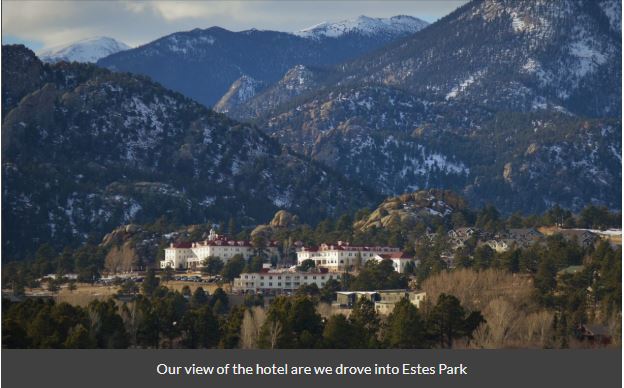 The Stanley is conveniently located just an hour from where we live. We arrived in the late afternoon, and before the sun dipped behind the Rocky Mountains it washed the hotel in a beautiful, heavy light.

We could tell from the parking lot the hotel was unseasonably busy.  One of the reasons we stay in the winter is to have the quietest (and therefore creepiest) hotel experience, but that wasn’t to be. We walked past the still-growing hedge mazes (a tribute to the movie) and into a very crowded lobby. Turned out, because it was both a Saturday and Leap Day, everyone wanted to get married.  The hotel was hosting four weddings that night, along with a show. The show was a stand-up performance by comedian and TV-actor Paul Reiser (remember him?), and we had tickets to his late show that night.

We checked in and got our keys to room 217. Up the antique elevator to the second floor. Halfway to our room there was a set of doors requiring key-card access, preventing the curious from skulking about outside 217’s door. 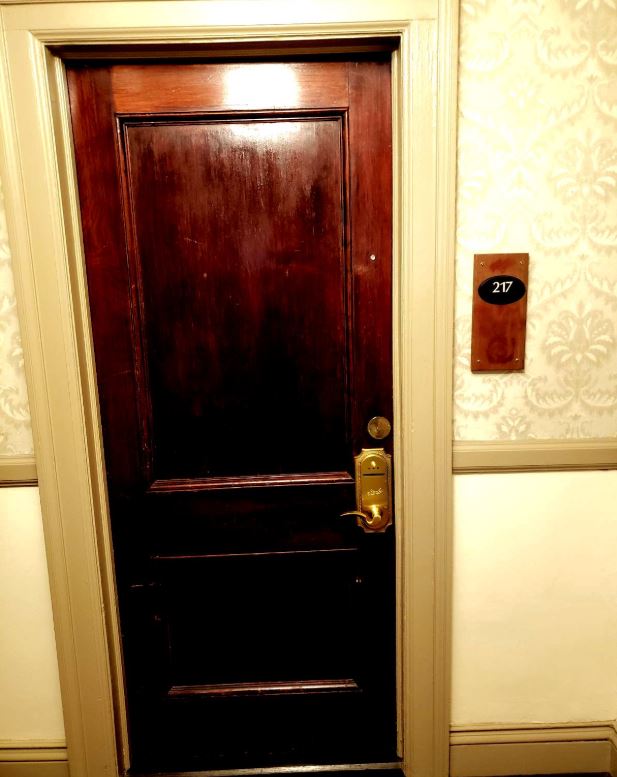 The room is the one of the largest in the main building, occupying a corner of the second floor. And it looked a bit more cared for than some of the others in which we’ve stayed; in truth, the hotel is old and fairly worn, though 217 was a bit less so. Distinct features in the room included a collection of Stephen King books and a photo of King and his editor.

So did we get a creepy vibe the second we walked in? No, not really. 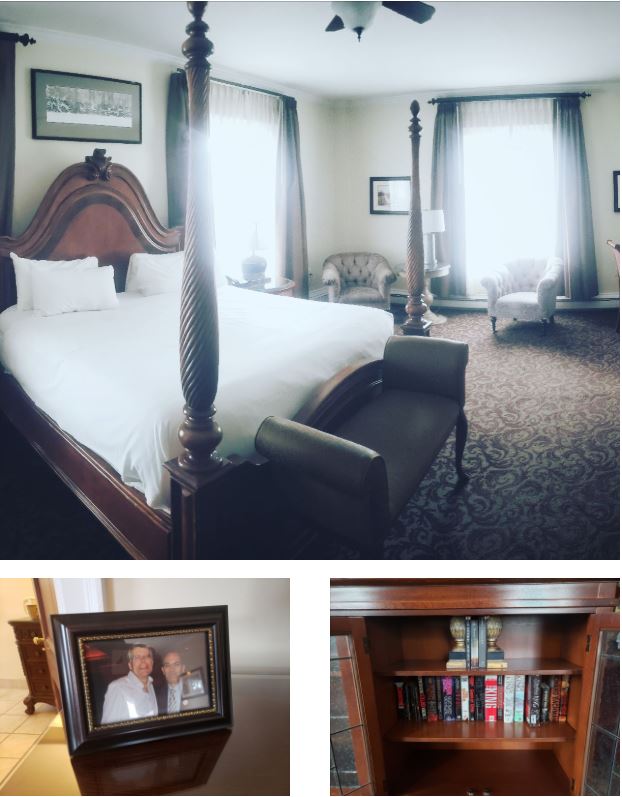 The bathroom was nice and big, and included the claw-foot tub featured in the book and the movie (the book used room number 217; the movie changed it to 237). King has claimed he took one look at the tub in the room and wondered about a body being concealed by the curtain. Nowadays, that’s no concern, since the shower curtain only covers about a quarter of the tub’s perimeter. I would later take a shower in this tub, realizing how woefully impractical this setup was unless one were to sit in the tub to bathe. And I never, EVER, sit in a hotel tub. Gross. 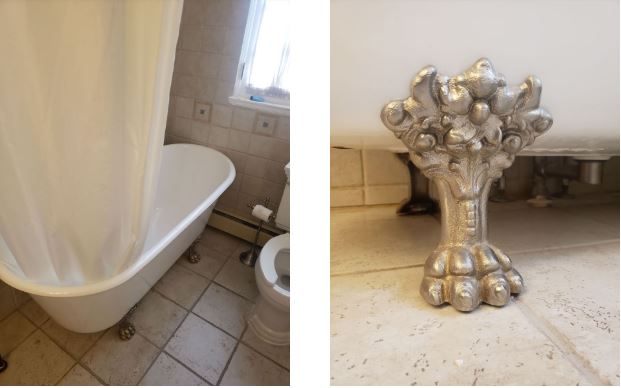 One of the first things I noticed was that someone placed one of my buddy’s (Jeremy Bates) books among the King collection, and I was immediately disappointed I hadn’t brought one of my own books to do the same (shameless whore that I am). Then Jessica called me over and showed me something she’d found. On the top of the desk chair sat a penny, perfectly placed. We didn’t touch it but I took a photo, and when I zoomed in I saw it was dated 1973. That was the year King stayed there. Okay, kinda creepy and cool, but only mildly so. 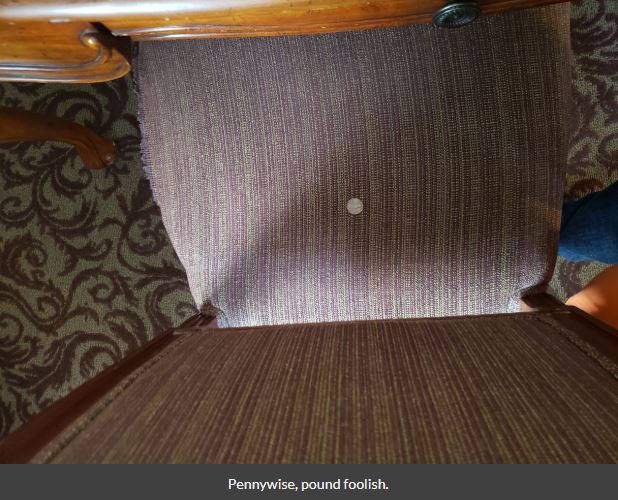 We were then distracted by yelling, which we thought was coming from the hallway, but soon realized it was just outside our window. On a flat roof adjacent to our room, teenagers ran back and forth like maniacs. I groaned. I no longer worried about a sleepless night due to ghosts, but due to assholes.

Otherwise, the room was pleasant but unexceptional. No bad energy. In fact, the room felt very comfortable and inviting, peaceful. This was in contrast to some of the other haunted rooms we’ve been in where, despite the lack of paranormal activity, there was a mild but constant tension about the atmosphere. 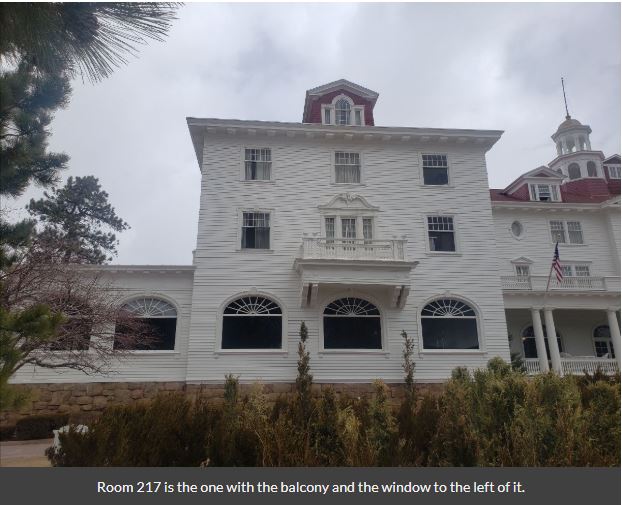 After unpacking, we headed downstairs to get a drink and get some writing done. The lobby was humming with activity, wedding parties abounded. One long-haired, tuxedoed groomsman walked through the lobby carrying an ax. I really wanted to stop him to take a picture, but I couldn’t quite muster the courage. What if he were really a spurned would-be groom, crashing the wedding with Jack Nicholson-like maniacal glee? I left him alone.

Then dinner in Cascades, the hotel’s restaurant. Our server looked to have seen a ghost, or maybe she was high, or maybe the hospitality industry just wasn’t her groove. Good food, more drinks. Almost time to see the show. 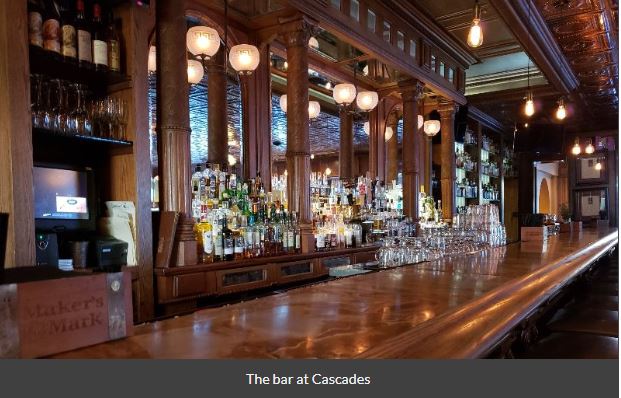 I went back to the room to drop off my laptop before the show, and lo and behold there was a tour group in front of my door. The Stanley offers ghost tours, and here were 30-40 people listening to the guide talk about all the crazy shit people have experienced in 217. I felt all eyes on me as I disappeared into the room. Inside, I had an itch to start screaming bloody murder, but, as with my failed ax-man moment, I just couldn’t do it. However, when I left the room and everyone looked at me, I pointed a thumb behind me and said, “There’s a ton of dead bodies in there.” It got a good laugh. The scream idea would’ve been better.

Onto the show. So, remember Paul Reiser? Mad About You? Stranger Things? It was a bit surreal seeing him perform stand-up in a little theater in the Rocky Mountain resort, and the demographic definitely skewed AARP, but it was a really great show. And since I’m a fancy-pants and had to buy VIP tickets, Jess and I got to do a meet-and-greet afterwards. 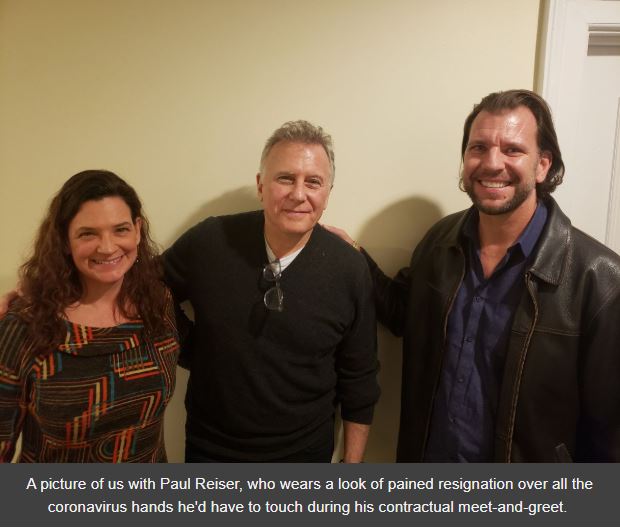 After the show, back to the bar for espresso martinis (alcohol takes the edge of hauntings). Finally, back to the room, where it was getting late. No one in the hallway. No kids on the roof next to the room. All was quiet.

The last few years we’d leave the room one last time for the night and wander the floors for any activity. This night, we stayed in, comfy in the bed with no sense of anything amiss. Jess fell asleep before I did and I stayed up a little longer reading. Around 1am I finally drifted off, remaining undisturbed throughout the night.

And though I really wanted something horrifying to happen (and who doesn’t?), I was still surprised by how extraordinarily peaceful the room was. I figured one of two possibilities were at play. One, the ghosts of the Stanley Hotel liked us and took us in as their special guests. Or two, ghosts didn’t exist and I just paid a shit-ton of money on a deteriorating hotel and a Paul Reiser show.

Ever the optimist, I hold out hope. 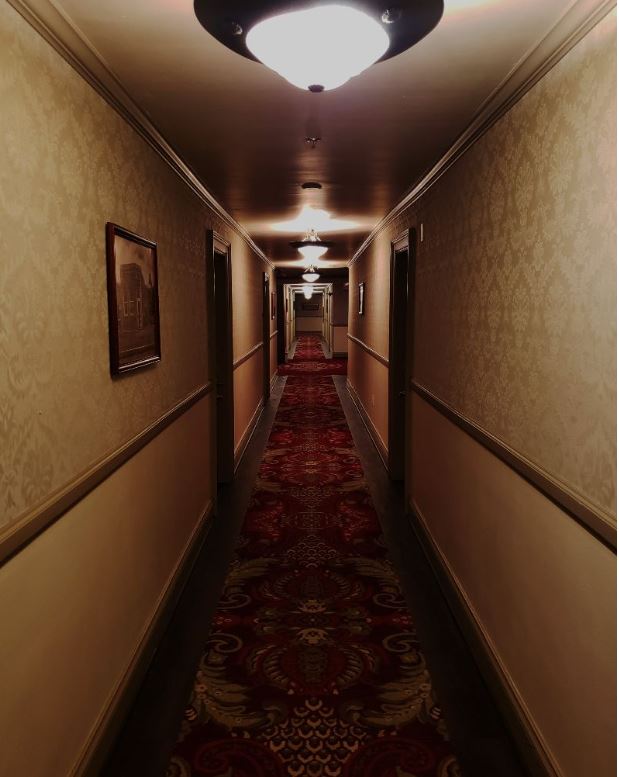 Once again, here I am eschewing thrillers or suspense novels this month, remaining in the world of non-fiction. And what a specific niche of non-fiction it is. Two books by Bill Carter, The Late Shift, (Hyperion, 1996) and The War for Late Night (Plume, 2011). Read together, the books tell the fascinating story of how late-night television was completely upended after the retirement of Johnny Carson from the Tonight Show in 1992. Carter is a fly-on-the-wall investigative reporter, spinning a narrative so focused and personal you finish the books with the sense you’ve had friendships with Letterman, Leno, and O’Brien your whole life. What becomes clear within these two books is how the drive to host the iconic Tonight Show was more alluring than any other factor for these three men. Hence the central problem: with just one Tonight Show and three massive talents (and egos), a fallout after Carson left was inevitable. And it could only be worsened by television executives trying to play all sides. Highly entertaining reads.

Picard, CBS All Access (2020). I never much cared for science-fiction nor fantasy, either in books or on the screen. I never played Dungeons and Dragons as a kid. Tried to watch Game of Thrones as an adult, got confused by all the names. Never saw more than a episode or two of the original Star Trek, and always found Star Wars mildly-to-massively overrated depending on the movie. All that being said, I was OBSESSED with Star Trek: The Next Generation (I even had a cat named Worf). Hard to pinpoint all the reasons that show resonated with me, but it was in no small part due to Patrick Stewart’s portrayal of Captain Jean-Luc Picard.

The last episode of The Next Generation was in 1997, followed by four related feature films concluding in 2002. And now he’s back. Goddamn Frenchman-with-a-British-accent Picard is back, and I subscribed to CBS All Access just so I could see if this show was a train-wreck, a masterpiece, or just a nice blanket to cozy up with and remember the simple times when the Clinton-Lewinski scandal was considered the trough of humanity. So far, I’m putting it in the third category. Patrick Stewart is consistently good (though he could be given better lines), the overarching plot is serviceable, and the special effects are, understandably, WAY BETTER now than in the 90’s. I can’t say I really care about where all these characters end up, but seeing Picard tap on his Starfleet communicator one last time is oddly comforting. And I suppose odd comforts are all we can really ask of life. 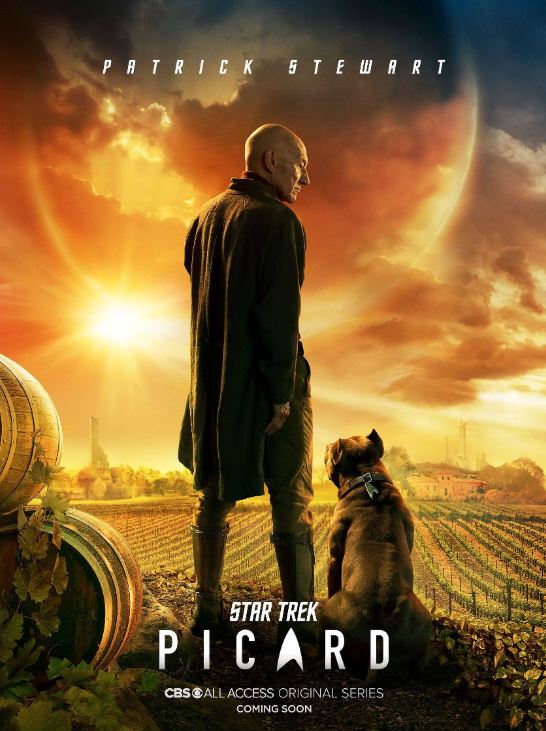 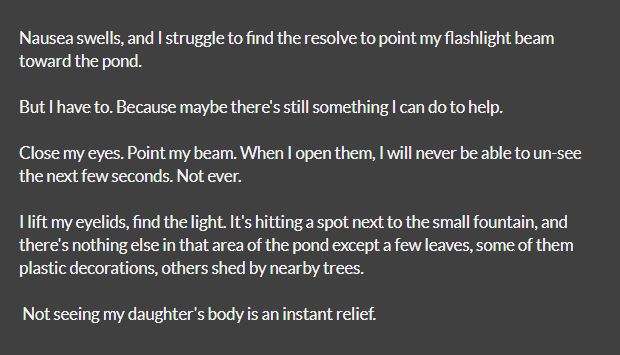 Another tattoo. I got my first tattoo (a raven, with the word “nevermore”) when I was thirty-eight. That was followed by a tattoo of a cool dead tree near my house with the words “So it goes” (a tribute to Slaughterhouse Five). Then followed a fountain pen with an inkwell with a day-of-the-dead skull and the words “kill your darlings” on it. Then, beneath the dead-tree tattoo, the words “And, I think, how lucky am I?” (the penultimate sentence in an as-yet unpublished novel of mine). All the tattoos are on my arms, and I want one more on my right arm. Now that I’m turning fifty this year (HOLY SHIT) I’m gravitating toward something softer, more peaceful, along the lines of an intricate mandala-inspired tattoo. I’ll let you know how it turns out.

Photo of the Month
Photo credit to my son, Sawyer, who took this shot in Lafayette, Colorado. No filters applied, just a phenomenal Rocky Mountain sunset. 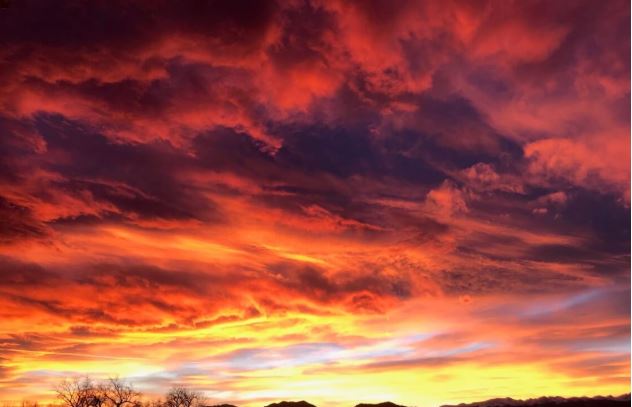 New phrase I learned from my kids: going ham.

Part two in a series where my demonic cat chases my children. My son got the cat riled up to the point where Guff went ham on his ass, actually leaping on his bare leg at the end of the video. 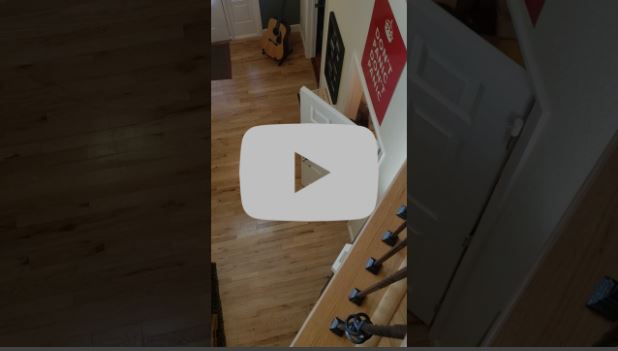 The bobcat! Another a prolonged absence, I had a sighting the other night. I think this is one of the kittens all grown up. The good lil’ kitty went up the small playhouse in the backyard and peed all over it. 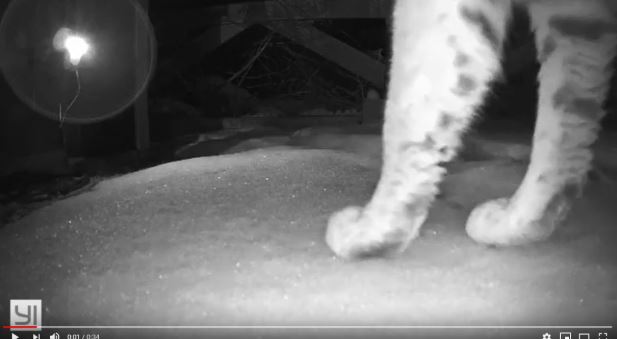