BIG NEWS: Halloween wasn’t a horrible disappointment! After my rant last month about the challenges of Halloween during COVID, I’m pleased to announce that it ended up being quite the success at the Wilson household.

Instead of creating a suffocating walk-through in my garage, I staged everything out on the lawn, creating the random theme of The Washburn Toxic Waste and Candy Company.  I had two mannequins and two large barrels, once barrel labeled “candy” and one “biohazard.” Then Sawyer and I took turns wearing a white hazmat suit and pretending to be a third mannequin. Henry was there as a “live” scientist reminding everyone that “COVID is real” and providing a distraction while the “third mannequin” came to life. 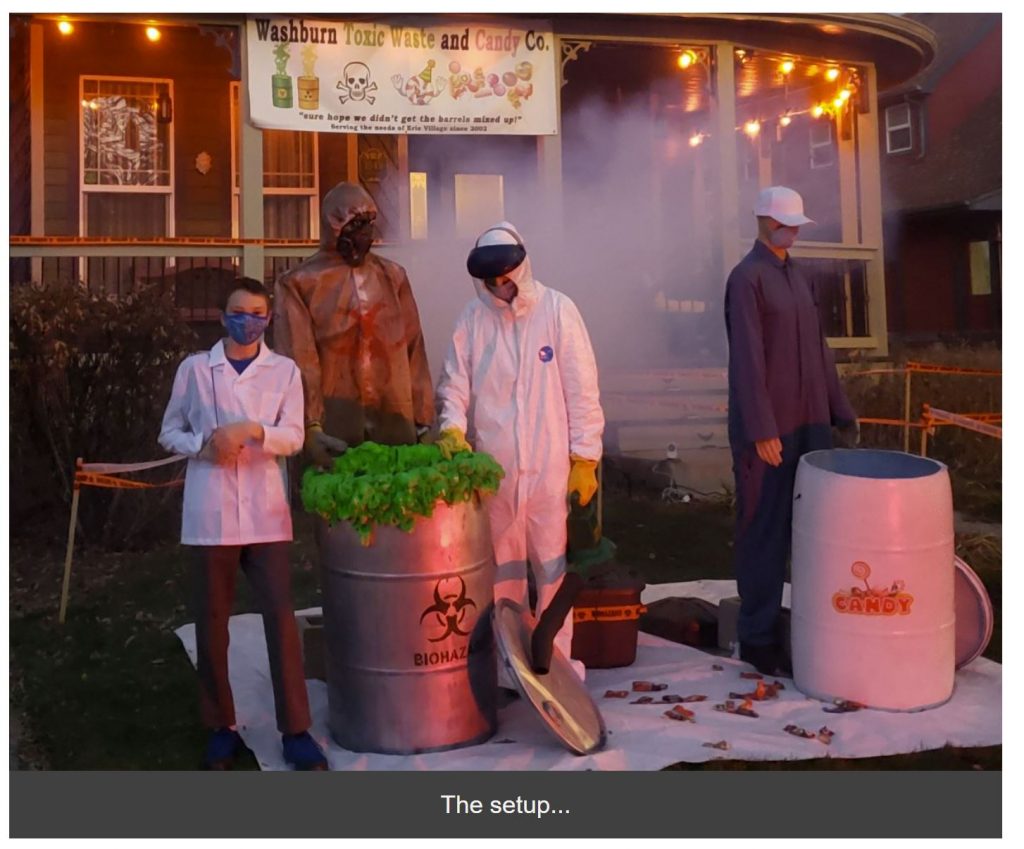 We had some candy on the ground and some in the candy barrel. A fog machine blasted smoke over the lawn, and the sound effects of a creepy laboratory filled the air. Then, the execution was simple. As kids would come up for candy, Henry the scientist would distract them while whomever was in the white hazmat suit would suddenly animate and turn on a leaf blower and scare the kids.

The overall trick-or-treater count was higher than I expected. The final tally (most accurately recorded by my neighbor) was 280. And, I’m happy to report that I personally heard at least one kid cry. Sure, absent COVID we probably would’ve had more kids and better screams, but at least for one night it was nice to feel like things were a little normal.

Highlight reel below. I’m already planning for next year, and it’s going to be goddamned epic. 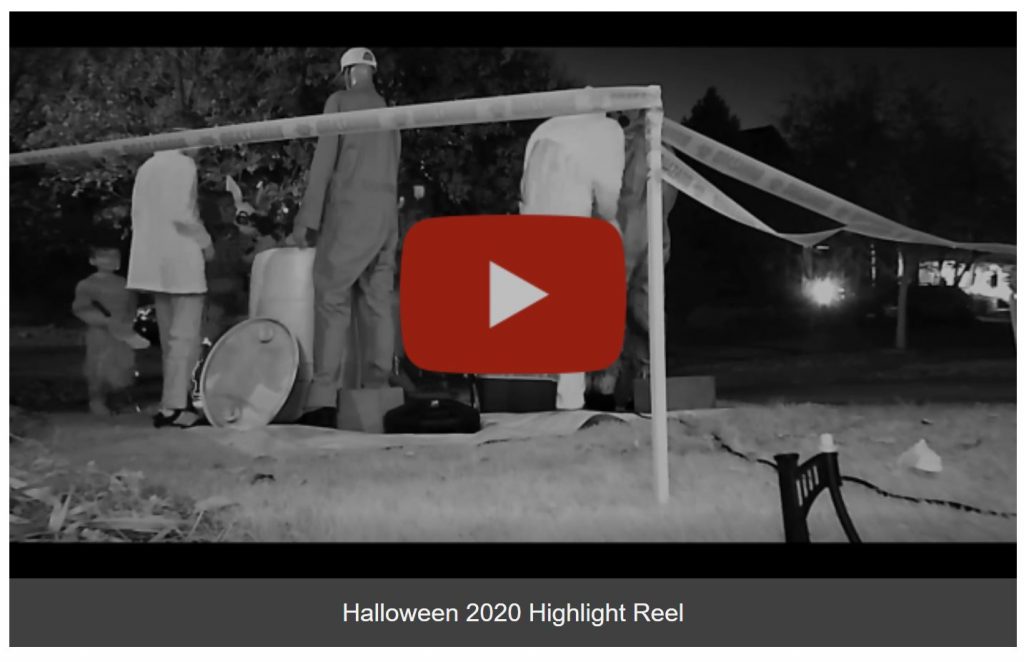 Just starting to get some early praise in for my upcoming book, The Dead Husband. Let’s hear from thriller-author extraordinaire and all-around good guy, David Bell:

In other book news, I’m excited to share that my 2018 award-winning thriller Mister Tender’s Girl is getting a makeover. The title has fantastic new cover art to be used with e-books and future printings. I really love the new look! 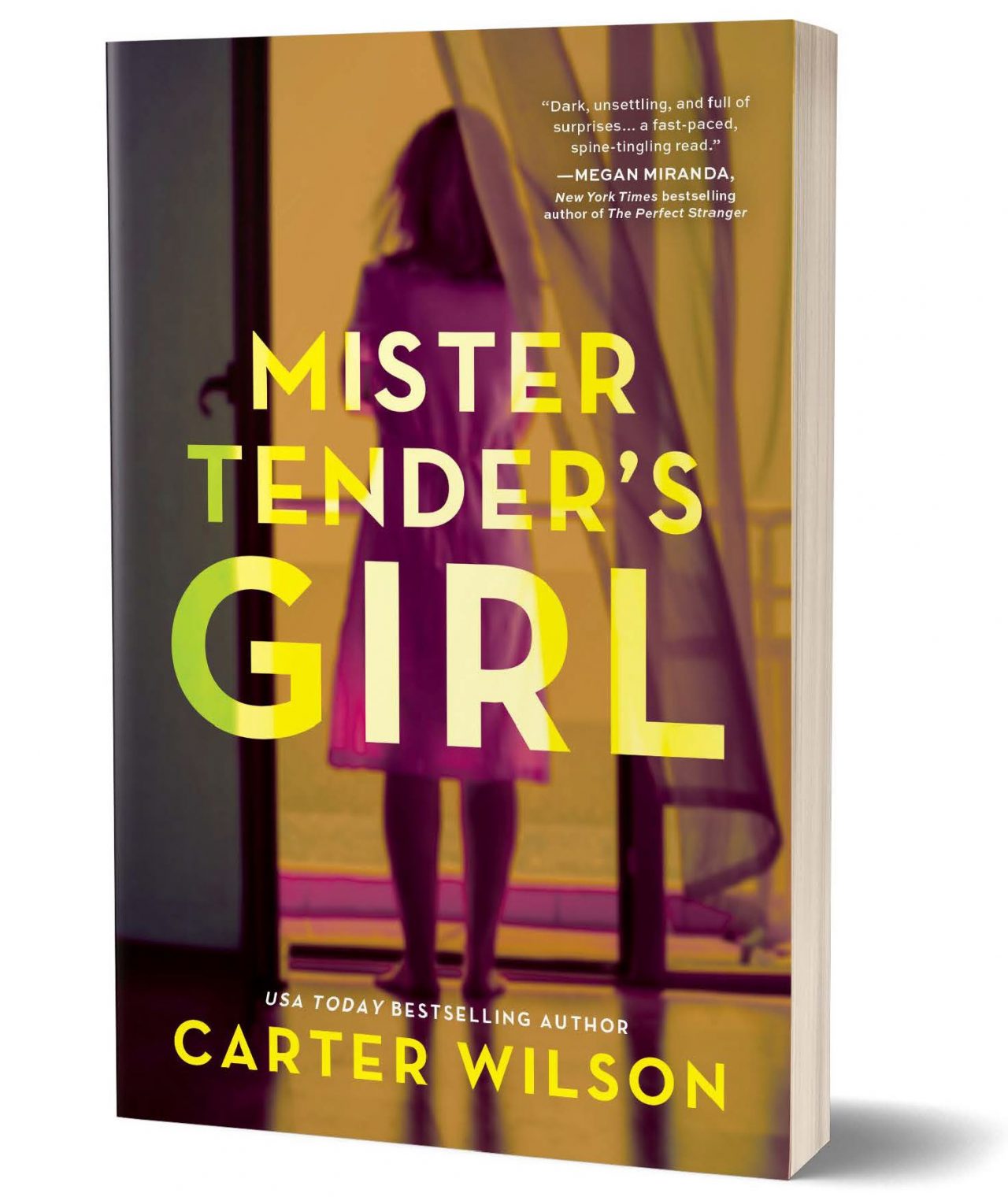 Some quick takes on what I’m reading, watching, and listening to:

Book:
The Year of Magical Thinking, Joan Didion (Knopf, 2005) – Okay, so this won the National Book Award and I went in with pretty high expectations. I dunno…it was…kinda blah. Beautiful writing, tragic enough, but by the end I simply wasn’t all that compelled with Didion’s memoir about losing her husband. Maybe I’m just a heartless bastard.

Netflix:
My Next Guest Needs No Introduction With David Letterman – Specifically, Season 3, episode 3 featuring Dave Chappelle. Whether or not you’re a fan of Chappelle’s comedy, he is a beautifully vulnerable interview subject in the hands of David Letterman. He espouses on reasons he left his popular show, on racism and police brutality, on the frayed state of the country, and on the importance of small-town communities like the one in which he lives in Ohio. I watched this interview twice.

The Haunting of Bly Manor – Oh my god, what a piece of shit this series was. I was actively rooting for most of the cast to die already so I could be spared the anemic acting and  nonsensical plot lines. The Haunting of Hill House was far better; skip this one.

Amazon Prime Video:
Borat: Subsequent Moviefilm – Oh, hell yes. Any movie that can get my 15 year-old to nearly pee himself laughing is going to rank high with me. Of course, you should know what you’re getting into with Borat; it’s definitely NOT for everyone. But this is the sharpest satire to be found, and worth watching alone just for the astoundingly pervy Giuliani scene.

Music:
I’m SO tired of my Spotify music. I need something new to listen to. Give me suggestions! 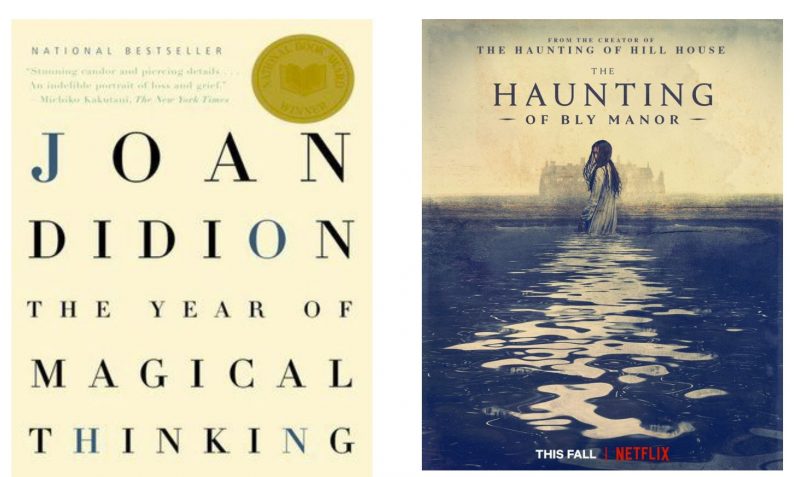 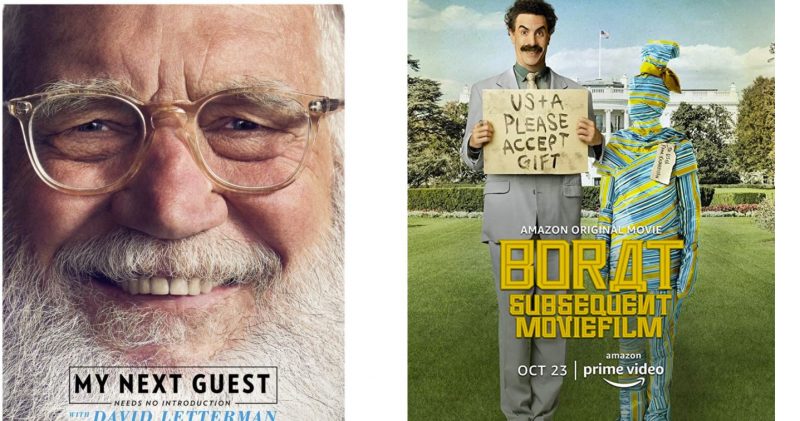 Up until my book launch next May, I’ll be sharing snippets of The Dead Husband in this space. This month’s passage: 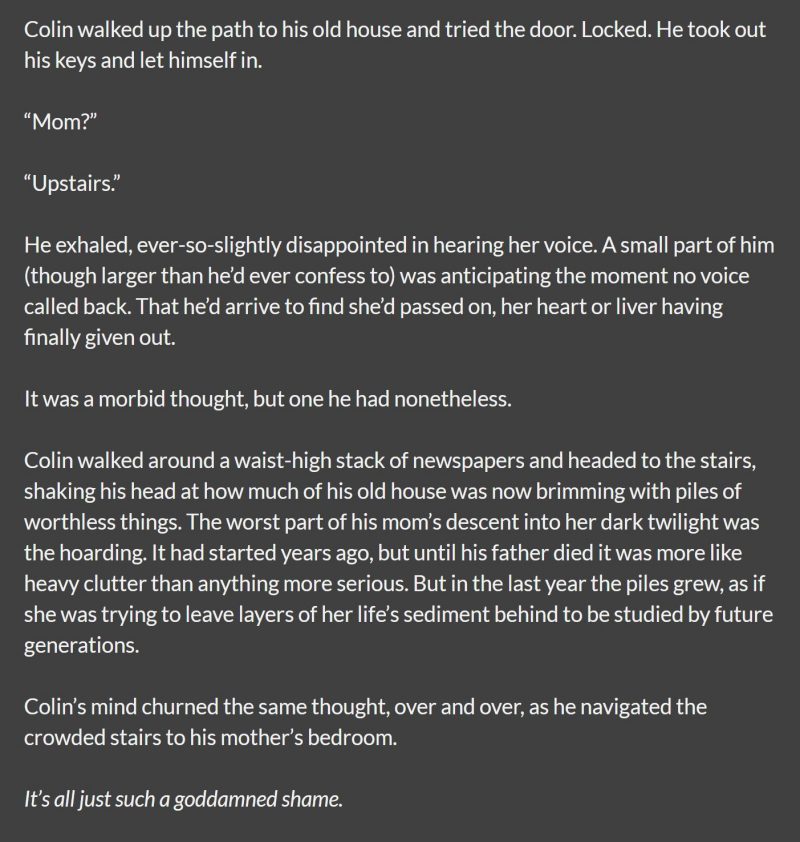 Photo of the Month
You may have heard about all the horrible wildfires in Colorado. While none were close enough to be a threat to my neighborhood, there were some large ones in my same county. Here’s a photo of a smoke-filled sky above my house around two in the afternoon. Rather apocalyptic. 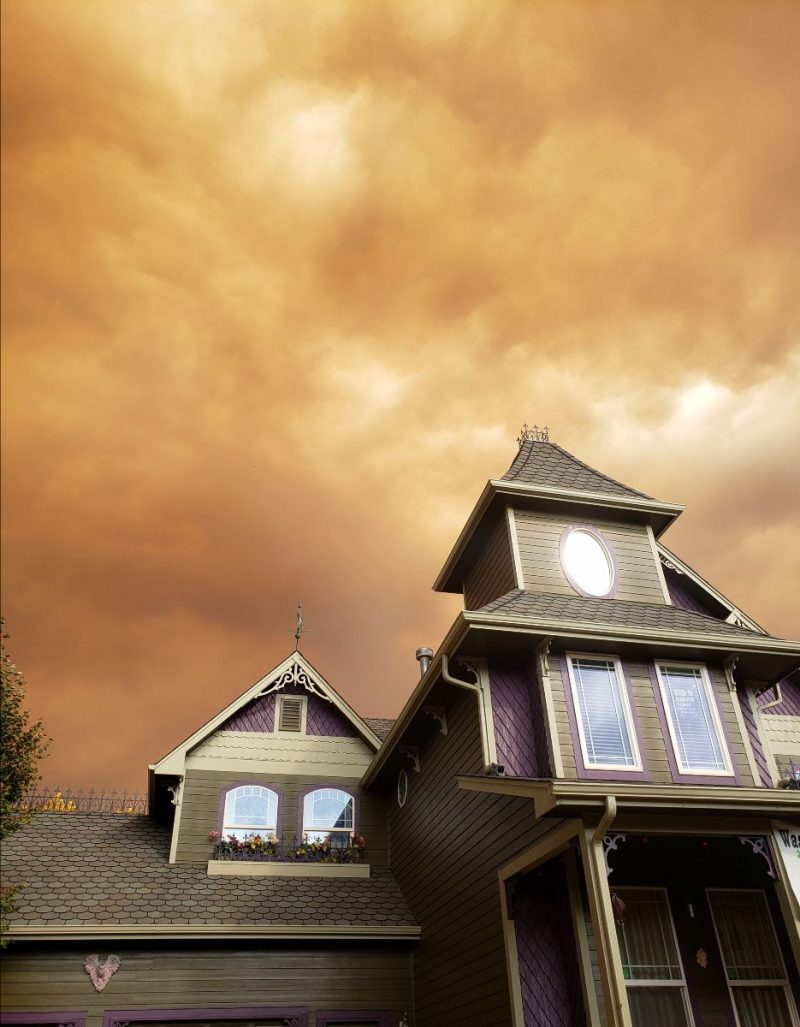 Update From My Kids
Nothing says fall more than when my mom makes ghost pie (chocolate pudding pie) and pumpkin bread for the kiddos. Ili was given the honors of drawing the ghost with whipped cream and let’s just say it wasn’t her finest piece of art. 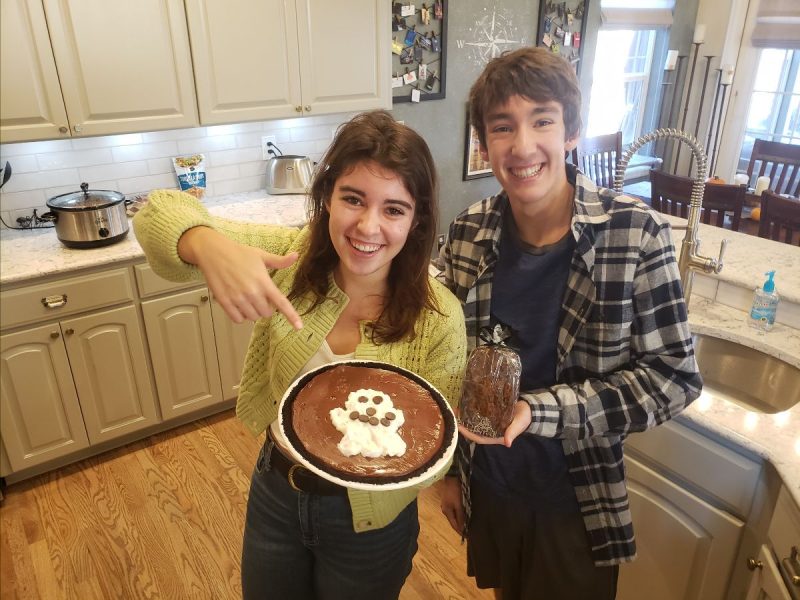 Bastard always climbs on my laptop as I’m trying to write. 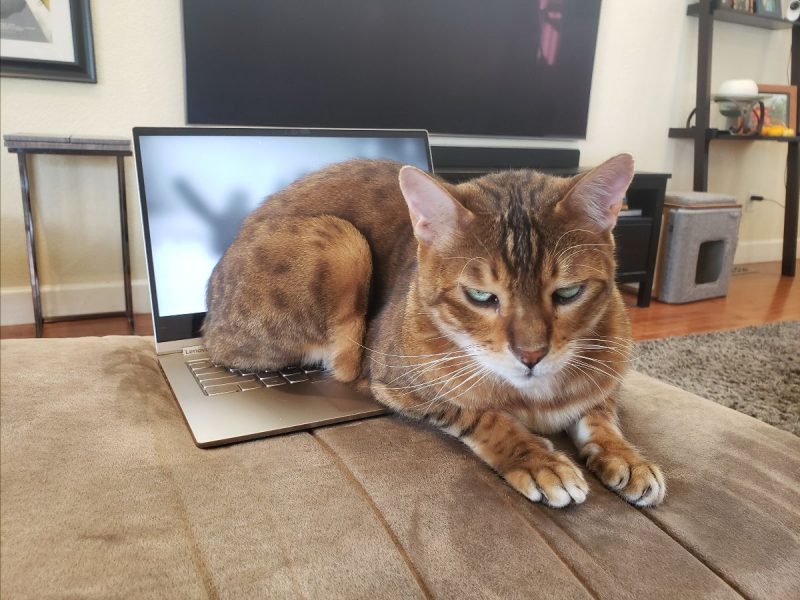 Do you know the ending of your books when you start writing?

Never! Hell, I barely know the beginning. I’m a seat-of-my-pants writer, because that’s the most interesting way for me to tell a  story. It’s exciting to sit down every day and not know quite where the story is going, because then I get to discover surprises and plot twists just as the reader does. I probably start to get an idea for the ending when I’m about 75% completed with my first draft. There’s nothing better than being nearly done with a book before realizing what it’s all about.

Have a question you want answered in my newsletter? Email me HERE.