The Day I Met the Dead Girl.

Jul 1, 2019 | Book news, Dead Girl in 2A, Uncategorized, What's Entertaining Me, What's in my backyard, Writing

My publisher bought my book The Dead Girl in 2A in 2018, though when I sold it that wasn’t its title. My working title was The Orphan List, but my editor wanted a different name (this is very common) and she came up with the finalized version. The “girl” in the title refers to Clara Stowe, one of the two main characters in the book. “2A” refers to Clara’s airplane seat number, and the stranger she sits next to, Jake Buchannan, is the other primary character in the novel. After taking their seats, Jake and Clara each become consumed with a visceral sense of knowing one another, and they spend the flight from Boston to Denver trying to see how their lives may have previously intersected. All they can come up with is each were orphaned at an early age and neither of them has any memory of their childhood before the age of ten. On the descent, Clara shocks Jake by revealing she’s headed to the Colorado mountains to kill herself. The novel is about what happens once Jake and Clara get off that plane.

Late last summer, shortly after the new book title was agreed upon, I was on a small book tour for Mister Tender’s Girl and was taking a plane from New York to Minneapolis. About once a year, maybe less, I get upgraded to first class based on mileage status. This was one of those rare occurrences. The gate agent handed me my new ticket as I’m boarding and I looked down at my assigned seat.

I got on the plane. Sixteen total first-class seats, every one of them occupied except mine and the one next to it, 2A. I remember quite clearly that all other fourteen seats were occupied by men. I sat down, slid my backpack under the seat, and slipped on my headphones. Then, one of the last passengers to board was my seat mate. A woman. Maybe twenty years old.

This was how that flight went:

HER:  Headphones on, book in hand.
ME:    Holy shit, what are the odds? I have to say something.
HER:  Angles slightly away from me, as if sensing a growing creep-factor.
ME:  What’s she reading? (tries to get closer look without being obvious). I think it’s a mystery novel. Has that kind of cover. Maybe that’s how I break the ice.
HER:  Increasingly oblivious to everything around her.
ME:  I never talk to anyone on planes and never want to be talked to, but I have to say something.
HER:  Lost in book. Plane takes off, fifteen minutes pass. Makes rookie mistake of removing headphones.
ME:  Awkwardly. “Good book?”
HER:  “Um, yeah.” Zero enthusiasm in her voice.
ME:  “What’s that, a mystery?” Oh, Jesus, I can hear her perv alarm ringing. ABORT! ABORT!
HER:  “Yeah, pretty much.”
ME:  I’ve said four words and I’m already trapped. I can tell her I’m a writer, which is the douchiest, come on-sounding line out there. Or I can make more small talk, hoping she’s chatty enough that I can tell her about this ungodly coincidence. But I sense small talk won’t work. She just wants to be left alone, and who can blame her?
HER:  Yes, leave me the hell alone. She doesn’t say this. She doesn’t have to.
ME:  Think of your newsletter, man! You have to say something, if only for newsletter content. You know how hard it is to think of shit for the newsletter every month. This is gold right here!

Five more minutes pass. Her headphones are still off. I decide just to go for it.

ME:  “Look, I have to tell you something, and I hope this isn’t weird.” THAT IS LITERALLY THE CREEPIEST WAY YOU COULD HAVE STARTED THIS. “But I have a book coming out next year. A novel. It’s about strangers who meet on a plane, a man and a woman. And they’re in seats 2A and 2B.”

I pause to gauge her expression. She’s clearly processing flight-or-fight. Then it hits me that it sounds like I just described a romance book. Like I just use this line on every plane ride. Hey, my book is about two would-be lovers meeting on the plane. Seats 22D and F. Aisle and window, no one shows up for the center seat. *wink*

HER:  Warily, “What’s the book called?”
ME:  Ah, fuck. How did I not foresee this? I can’t make eye contact. I look to the ground and mumble, “Um, The Dead Girl in 2A.”
HER:  Eyes suddenly wide. “What?”
ME:  Frantic. “I mean, she’s not really dead. She just wants to be.” Oh, sweet Jesus, you’re making it worse. She’s gonna hit the call button and tell the flight attendant there’s a serial killer on the plane and to alert the authorities on the ground.

In a desperate bid to avoid a total crash-and-burn, I blurt out the overview of the book, a two-minute elevator pitch. I tell her it’s mostly a thriller about memory and sorrow, with a little murder and government conspiracy thrown in. When I finish, I sit back and wait for her to say something.

HER:  “So do you purposefully book seat 2B on all your flights?”
ME:  Actually waving my hands. “Oh no. Oh, god, that would be weird. Not to mention expensive. I never fly first class. That’s what I’m trying to say. All of this is just such a bizarre coincidence. I just had to tell you.” Well, actually, I wanted a story for my newsletter.
HER:  Considering. “So, this woman goes to Colorado?”
ME:  “Yes.”
HER:  “And she’s going to the mountains to kill herself?”
ME:  “That’s right.”
HER:  Mulling this over. “I’m going to the mountains.”
ME:  Whoa. “Well,” I say awkwardly, “you seem like a happy person.”
HER:  Leaning in just a tad. Lowers voice. “What’s this woman’s name?”
ME:  A volt of electricity running from my neck through my arms. “Clara.”
HER:  Relief on her face. “Oh, thank God.”

After this exchange, she then relaxed a bit more and we ended up having a very nice conversation. She told me her name, which wasn’t even close to Clara, and said she was a college student headed to a family reunion in Vail. She also confirmed she was indeed a fan of mystery and thriller novels. Before I finally left her alone, I asked if she was okay with a photo of us that I could share in my newsletter, and she graciously agreed. Finally, I gave her my card (a little creepy, but I think okay) and told her I’d be happy to send her a signed copy after the book came out in mid-2019. All she had do was email me. 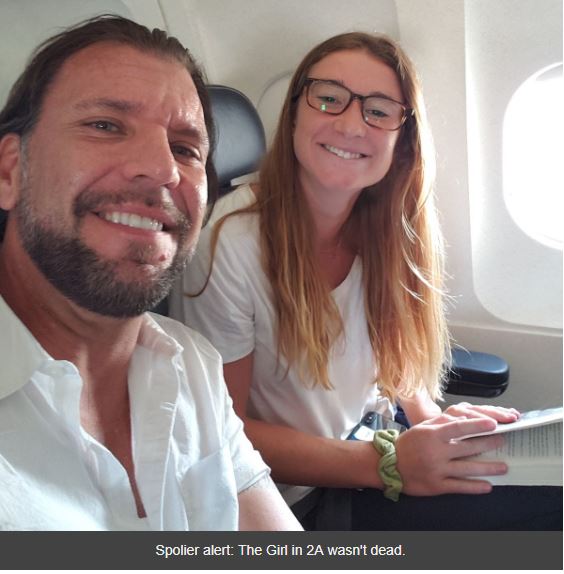 I’m beyond thrilled to announce that my fifth novel, Mister Tender’s Girl, won the Thriller category at the 2019 Colorado Book Awards. That makes my third Colorado Book Award (Revelation (2017), The Comfort of Black (2016)). A huge thanks to Colorado Humanities and the Center for the Book, along with all the judges who donated their valuable reading time. 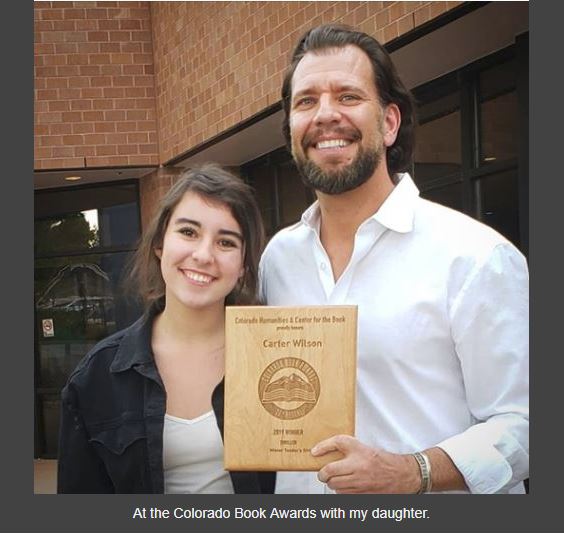 What’s NOT Entertaining Me

What I’m Not Reading

Anything, really. I’m waist deep in a new story so I’m particularly avoiding reading fiction at the moment; I don’t want to be unconsciously influenced by any other writing styles. I know that sounds very precious, but I do think it can happen. In terms of non-fiction, there was a heartbreaking and fascinating story on the front page of the New York Times (Sunday, May 19) about the rise and fall of the NYC taxi-medallion market and how it’s led to a rash of suicides among immigrant cab drivers. Worth a read (if you can handle more depressing news about the world).

Game of Thrones. I started watching this when it first aired years ago. I don’t particularly care for fantasy shows or books, but GOT was all the rage so I gave it a try. I wasn’t so turned off by the violence as I was by just figuring out who the hell everyone was. I remember the second season starting and having to go back and Wikipedia the first season just to remember what happened, and I still couldn’t keep things straight. I’m incapable of memorizing all those funky character names, much less all the different kingdoms/lands/shires/whatever. Of course, this is my fault for having the attention span of a fruit fly. I can’t even keep track of all the players on Survivor when I watch it with my kids. I swear in the last season it was down to the final four players and I’d turn to my daughter and say, “Who’s that guy with the beard and nipple ring again?”

Avengers: Endgame. If me not liking Game of Thrones is annoying, you may really hate my opinion on superhero movies, which is they are for children. I just can’t get into them, and it’s all the worse when you pack a bunch of superheros into the same goddamn movie. (let’s see how many unsubscribes I get after this newsletter). God, all that CGI. Enough already. It’s exhausting.

One caveat to this: I DO enjoy a “superhero” movie in which the title character doesn’t have innate, magical powers. To wit, Batman Begins was brilliant, as was The Dark Knight. Also, Wonder Woman and Iron Man. Those were just movies about folks with some cool toys and martial-art skills hell-bent on revenge. And revenge movies rule.

I always loved this picture I took of my alma mater, Cornell University. This was taken from my room at the Staler Hotel a few years ago in the fall. Such great colors.

I love lists. Oh, how I love lists. There are always lists in my house of things to do, scattered about. And don’t even get me started on my adoration of Post-It notes.

I had a to-do list on the counter the other day, and when I looked down I noticed my daughter added an item onto it.

I thought that was hysterical, until I noticed she accidentally wrote “is” instead of “in.” It ruined the whole impact of an otherwise great line. I grounded her for a week. 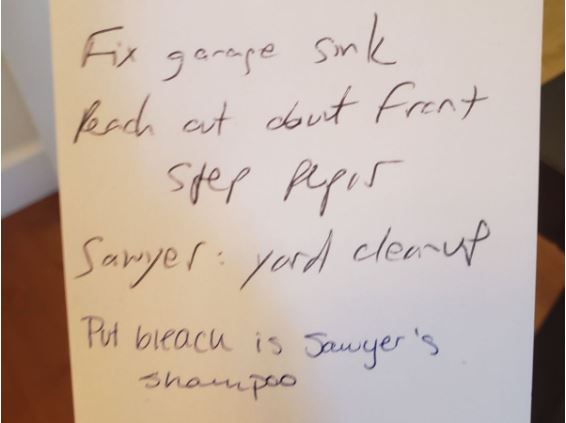 It was my fault for A) petting him while I was drinking wine and B) assuming he wouldn’t decide to randomly seize my flesh with the delirious craze of Jeffrey Dahmer on a dinner date. The little bastard clamped right down on my arm, making me drop and shatter the full glass of red wine. 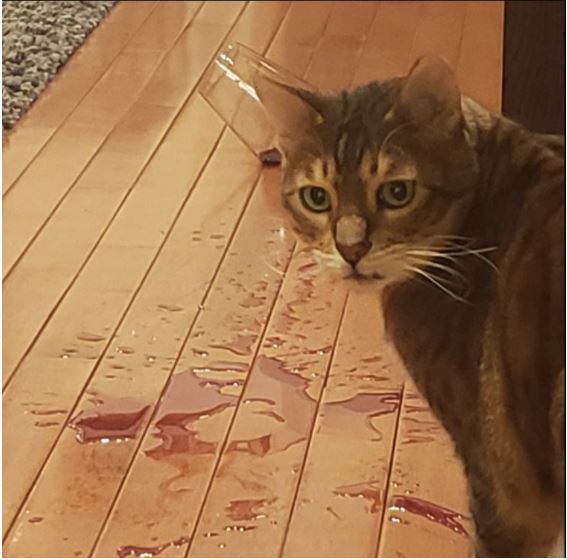 Actually, this was in my driveway. Look how cute! Just a harmless little garter snake (until one of you writes me “no, actually, that’s an Inland Taipan with enough toxicity to bring down an elephant with one bite.”) 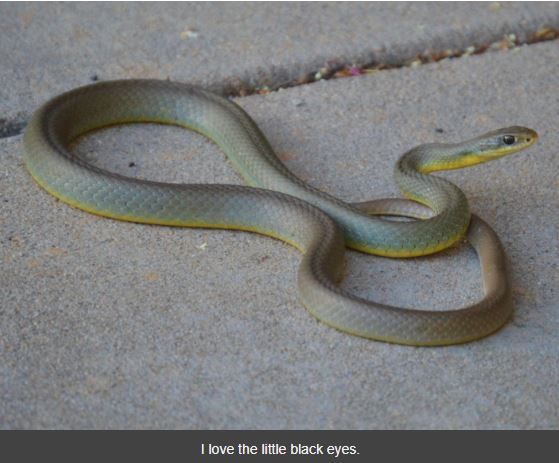