Why I believe in ghosts.

I went to school at Cornell University in Ithaca, New York back in the early nineties. My friend Donna and I were each going to spend the spring semester of our junior years abroad, so we decided to look for a place together for the fall, hoping to find a landlord willing to lease out an apartment for just one semester.

So, we found this house. Actually, half a house. An old house that had been divided in two parts, located at the base of the Ithaca Cemetery (for real) and at the edge of a gorge (for real). Some grad students lived in one half, and the landlord was willing to lease us the other half for just a semester. The space was huge, cheap, and available, all of which seemed weird, but, okay, whatever, we’ll take it.

The old house had two stories and a basement. All was pretty normal except the basement, which had a dirt floor, a collection of moldy newspapers dating back to the fifties, and something that looked very much like an oldie-time version of an iron lung. It was a curved contraption comprised of rusted metal and hinges, and looked very much like it was supposed to clasp snugly around an upper torso. Yup, it was just sitting there on the dirt floor of the basement.

Oh, and there were four locks on the door leading from the house into the basement. Mind you, there was no exterior exit from the basement, so those locks only served to trap something inside the basement itself.

Donna and I joked the place was haunted by the look of it and the little things that had begun happening. Like the TV turning on by itself, or Donna never having hot water for a shower and I always did, regardless of which order we showered. I mean, little things. Not enough to make me believe in the supernatural. As for Donna, she was a little more on edge about the place than I was.

Then, three things happened that changed my worldview.

First, a friend came over to visit on afternoon, and she was babysitting this kid, maybe four years old. They walked in the house and lil’ Damien beelines directly to the basement door, where he stood a foot from it and just started screaming. I’m not kidding, this kid just lost his mind to the point my friend had to take him out of the house.

I didn’t tell Donna about that.

A few weeks later, I came home from school. Mid-afternoon. Donna’s not home and I head up to my room, where I decide to take a little nap. My room was almost like a tree-fort. Heavy wood panels covered the wall, and that section of the house was perched up over the gorge, so it felt like it was way up in the trees. I was there, laying in bed, eyes closed, facing the wall. I wasn’t asleep, mind you. Just laying there. Suddenly, there was a voice behind me. RIGHT BEHIND ME.  A woman. She said something that was clear, but jibberish. Maybe another language, but there was nothing familiar about the words. This lasted maybe two or three seconds. I immediately spun around and opened my eyes, but nothing was there.

I was horrified. Frozen. Hoped that I was actually asleep and dreaming, but I knew I wasn’t. I had never in my life experienced anything remotely like that before.

I certainly didn’t tell Donna about that, either.

The very next day, I came home from school. Same time, mid-afternoon. This time, Donna was home, and she was sitting on the couch in the living room, crying. I rushed up and asked what was wrong, and she told me a few minutes earlier the voice of a woman spoke to her. Jibberish words, but clear. She described the exact same experience I had had the day before.

I decided to tell her what happened to me. Donna freaked. She moved out for a week, leaving me alone in that goddamned house.

Time passed. Donna finally moved back in, and we had maybe a month left to go until the end of the semester. Nothing at all unusual happened until our last week of school before winter break.

It was finals week, and Donna and I were working together on a paper for a class we were both taking. It’s late, past midnight, and we were downstairs in a small room working on the computer. She was typing and I was standing behind her. I had the stereo in my upstairs bedroom blaring to help keep us awake.

Then there was a scream. An actual, no-holding-back piercing scream of a woman, and it was coming from upstairs. It was short but loud, as if this woman had just been stabbed.

Donna looked up at me, wide-eyed, her face flushed and sweat instantly beading her forehead. Adrenaline rush. I was thinking: this is real. I’m experiencing this with another person. We each heard the same thing. This is all really happening.

I somehow mustered the courage to go upstairs, which was somehow even more terrifying with the loud music blasting from there. I went to my room, turned the stereo off. Turned on all the lights. My room. Donna’s room.

I don’t recall if Donna moved out again. All I know is the semester finally ended and we were done with that house. I told these stories to some college friends, and about a year later one of these friends was working part-time delivering pizzas in Ithaca. Sure enough, she got an order from this very house (which had a memorable address: 130 1/2 University Drive). She walked up the porch, and when the college student living there opened the door, my friend made some remark about how she’d heard stories about that house. Without even waiting to hear more, this college kid exclaimed, “this place is totally haunted.”

So, yeah. I believe. 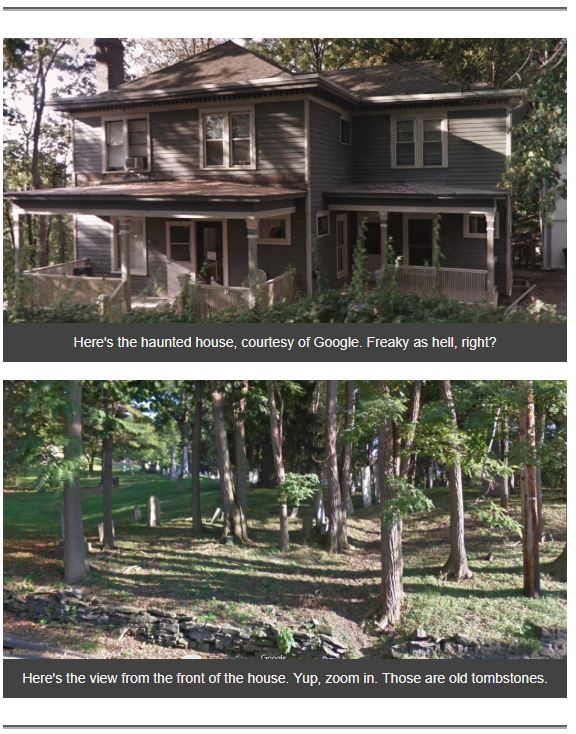 ← Previous post: So, are you working on something new? Next post: 11 things you didn't know about me. →