On killing your darlings.

Fifteen years ago I started writing stories. What started as an exercise to stave off boredom during an eight-hour class became the foundation for my first novel. That manuscript never sold, so I kept writing. Manuscript number two went nowhere, as did numbers three and four. But I was learning. How to pace. Realistic dialogue. And how not to take rejection personally, because there was a lot of it. My fifth manuscript finally sold, becoming my first commercial book release after nine years of attempts. And now, in one month from today, my fifth book will hit the stores.

Mister Tender’s Girl represents all I’ve learned about writing over the past decade and a half. I still have a lot to learn, but I’m pretty pleased with this story and I’m thrilled it’s received such early critical recognition. Most of all, though, I’ve learned how to kill your darlings. Have you heard that term? In a nutshell, it means don’t be too pleased with yourself. You might have the most clever sentence in the world, but if it doesn’t propel your story forward, cut it out.

I’m a firm believer in killing your darlings, so much so I have it tattooed on a skull-emblazoned inkwell on my arm. It also serves as a warning to my kids not to get out of line. 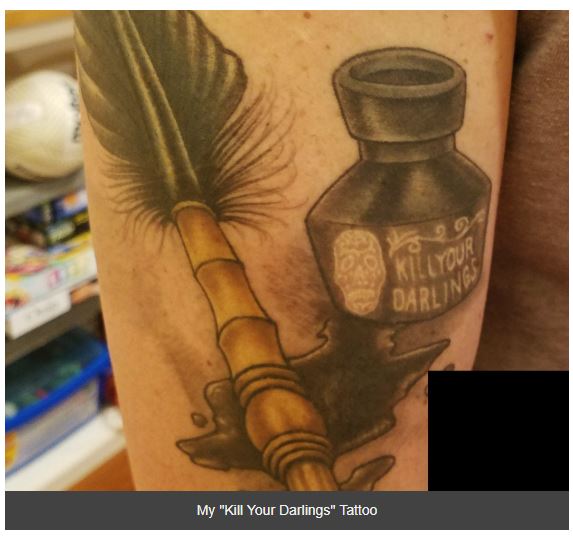 Book: B.J. Novak’s  One More Thing.  A collection of short stories and observations from the writer and actor widely known for his work on the acclaimed comedy series “The Office”. Odd, irreverent, funny. Don’t expect cohesiveness or a thread through the stories. Just read it to laugh.

Movie: American Made  I’ve always liked Tom Cruise flicks, especially those where he’s not asked to take himself too seriously. Loosely based on a real-life TWA pilot’s rise as a drug-runner back in the 70s, this movie is nicely balanced with humor, action, and history. If you like Narcos but yearn for a lower body count, check this out.

TV Show: Wormwood (Netflix). An intriguing look back at the CIA’s mind-control attempts through the use of LSD in the 1950s. Part-documentary, part re-imagined drama. Warning: this show will not restore your faith in the government.

Last month I told you about my annual writing and ghost-hunting retreat at the Stanley Hotel. Jessica and I headed up on December 23, a cold and snowy Colorado day. At the front desk I asked if there were any haunted rooms available (there are seven, by conventional wisdom), and was given the keys to room 418. Now, room 418 is said to be one of the most active rooms in the hotel, with most stories centered on hearing children laughing, playing, and running around. So how was it? Jessica did say in the morning she had a very lucid dream about a redheaded boy dressed in turn-of-the-century garb.

Me? Slept like a baby. Which actually is kind of spooky, since I normally sleep terribly. Thank you, ghosts!

Stupid Thing I Did Recently

I dropped an entire family-size Stouffers baked-ziti dinner. I was pulling it from the 425-degree oven and, since I’m an idiot, I used just one hand. The thing bent and the contents just slid out all over the inside of the oven door and the kitchen floor. It was sad enough I was resorting to Stouffers to feed my family, but now if we wanted to eat we’d have to pick cat hairs out of our meal. Seriously, it was awful. Looked like a crime scene. I regret not taking a picture.

Monthly Highlight From My Cat

OK, technically, this video doesn’t even show my cat. But it does show Jessica’s dog, who is deathly afraid of my cat (as she should be. My cat rains death from above and below…you’re dead before you feel anything). Though Tuli outweighs Guff 5:1, all my cat has to do (as he is doing just off-screen) is throw a little side-eye gaze her way to elicit this reaction. 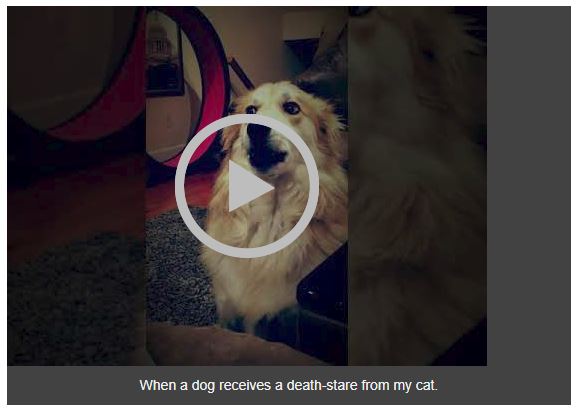