I love to swear. It’s truly one of life’s pleasures, but that doesn’t mean my potty mouth should always make its way into my writing.

Everyone has an opinion about profanity in books, and authors have a balancing act to perform when it comes to how much of it, if any, to use in their books. The writer has to be true to a character’s voice while also being sensitive to readership, and there are readers who will put a book down if they feel immediately assaulted with harsh language (so I’ve been told…).

I’m sensitive to it as well. Recently I was reading a book so riddled with the f-bomb I struggled to connect with the main character. That book was Ghandi: An Autobiography(ha, I kid!). This was actually another thriller, and after chapter upon chapter of repeated use of the word I grew bored. The way I see it, profanity, like sex and violence, should be used in thrillers for character definition and story momentum, and not just out of some sense of obligation to the genre.

It’s taken me time to figure this out, and my earlier books were often loaded with swear words. But now, with my sixth book coming out, I’ve evolved in how I treat profanity. As I’m writing a draft, I throw in whatever curse words I want and don’t think too much about it. Then, as I edit, I critically review every instance of profanity and ask myself: Is this sentence better with that word? Would this character really say that? Does the word add value to the story? I find myself removing the curse words most of the time, so the ones that remain have even greater impact.

Because I’m a data geek, I went through all of my six books to see how my use of profanity has trended over time. The results are detailed in the nifty graph below: 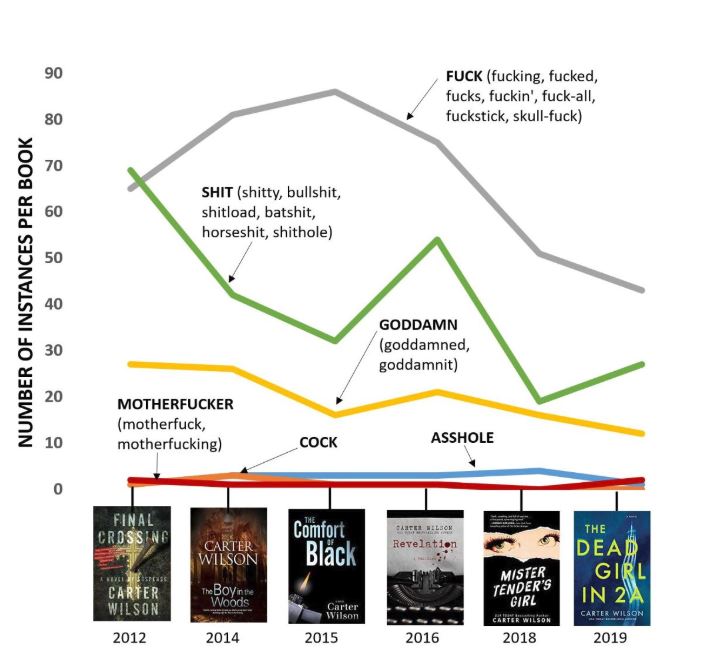 Overall, I prefer the word fuck and its variants above all others, with shit nicely represented as well. I steadily sprinkle in goddamn here and there for taste. There aren’t a lot of motherfuckers, cocks, or assholes in my books, but they do show up once or twice each story, like old friends dropping by for a visit.

So how has my total use of profanity trended over time? 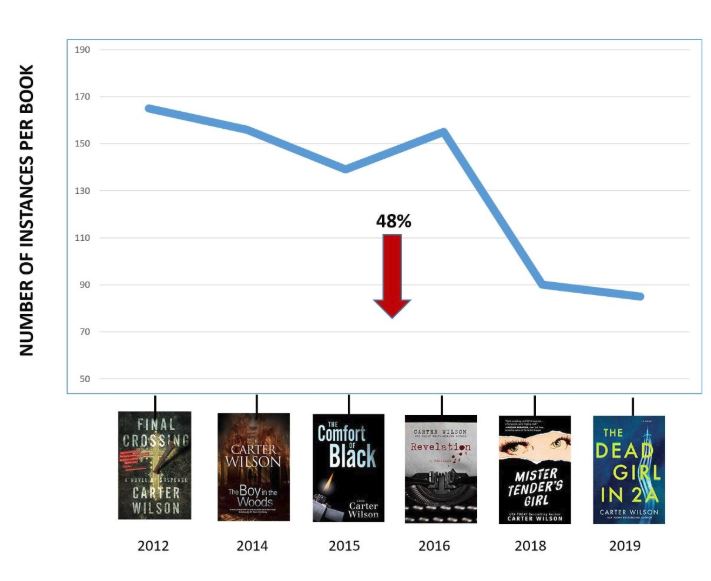 From book #1 to book #6 my total use of curse words has declined by nearly half. My first book, Final Crossing, has the most profanity, with 165 instances. The upcomingDead Girl in 2A has the least, with 85. There was an interesting spike with book #4,Revelation, mostly because I seemed to go all-in with shit in that book. That was followed by a substantial swear-word decline in Mister Tender’s Girl.

All in all, over the course of six books I used profanity 790 times. The total combined count in those novels was 524,479 words, yielding a profanity usage rate of 0.15%.

So what does that all mean? Am I truly evolving, or just being overly sensitive to commercial readership?

Fuck if I know. I just like making graphs.

What I’m Reading
Shoe Dog: A Memoir by the Creator of NIKE, Phil Knight (2016, Scribner).  If you’ve been following me you may have noticed I tend to read more non-fiction than fiction, and Ireally love a good memoir. Knight delivers a fascinating story of an aimless twenty-year-old traveling the world who becomes the founder of one of the most iconic companies in existence. What I love about this story is the amount of sheer failure (and near-failure) Knight and his cohorts face, only to persistently claw their way back to success each and every time. Shoe Dog is entertaining, motivating, and a sublime example of entrepreneurial spirit. Moreover, the book is brilliantly ghostwritten by J.R. Moehringer, whose The Tender Bar is one of my favorite memoirs of all time.

What I’m Watching
Too Funny To Fail (2017, Hulu). An esoteric documentary about the rise and freefall ofThe Dana Carvey Show in 1996. Carey was hot and coming off his run on SNL and Wayne’s World when ABC pitched him his own show. How could it fail when one of the hottest comedic stars in the country was on the marquee? Well, by assembling a writing staff that wanted to push to the edge of broadcast television standards, then punch right through them.  The staff included Louis C.K. (head writer), Steve Carell, Stephen Colbert, Robert Smigel, Charlie Kauffman, and Bob Odenkirk, Like Monty Python’s U.S. reception, their skits were bizarre, hysterical, and just too out there to attract a wide prime-time viewership. A fascinating look at the balance between creativity and marketability, Too Funny To Fail is worth your time.  Did you know? SNL’s Ambiguously Gay Duo was first debuted at the Dana Carvey Show, and Ace and Gary were voiced by Steve Carrell and Stephen Colbert. 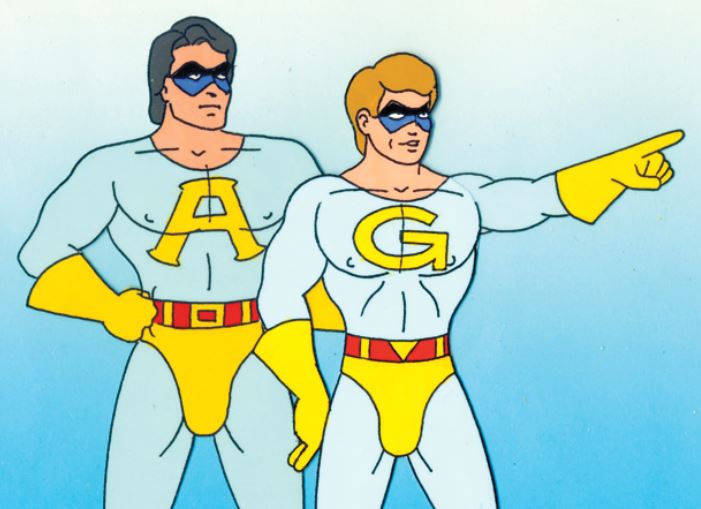 People I’m Judging
The guy I held the door for the other day who said nothing.

Set of double glass doors, walking into an office building. I go through first, aware there’s someone right behind me. After I pass, I give the door that little extra push and shoot the guy a look that says see, I’m doing something nice by barely holding the door for you. By societal standards, we’re required to look at each other for a second and he’s supposed to say thanks, give a nod and smile, or at the very least mumble some kind of acknowledgement. But this guy, this fucking guy, looks right at me and keeps the expressionless gaze of a sniper who’s just come home from war and can’t adjust back to society. Says nothing. Does nothing. Just locks in on me as if daring me to say “you’re welcome.”

Then, the instant dilemma of the NEXT set of doors a mere six feet away. Do I let him pass and see if he’ll hold the door for me? Do I walk through with my back to him and let the door close in his face?

I hold that door open for him, too, because I’m a polite little bitch. Again, he just stared at me.

I hated myself for the rest of the day.

I’m featuring one image a month of some of the favorite photos I’ve shot (you can check out more of my work here).

This was taken in Belize, where Jessica and I escaped to for a few days in January. We stayed at the Matachica Resort, which I cannot recommend highly enough. This was at sunrise. 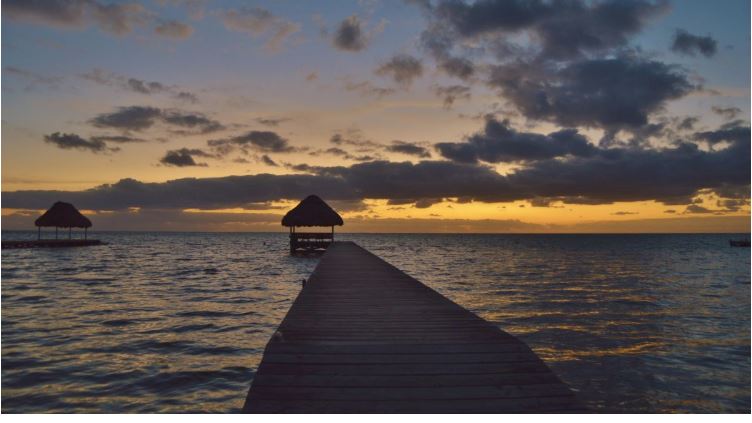 We keep a dry-erase board in the kitchen for grocery lists, reminders, etc. The other day I found the following drawn on the board:

1) A tiny bird suckling from some purple horse/cow hybrid, the latter of which is exclaiming “Oh hell neigh.”

I’m estimating that this image alone will eventually represent $10,000 in therapy. 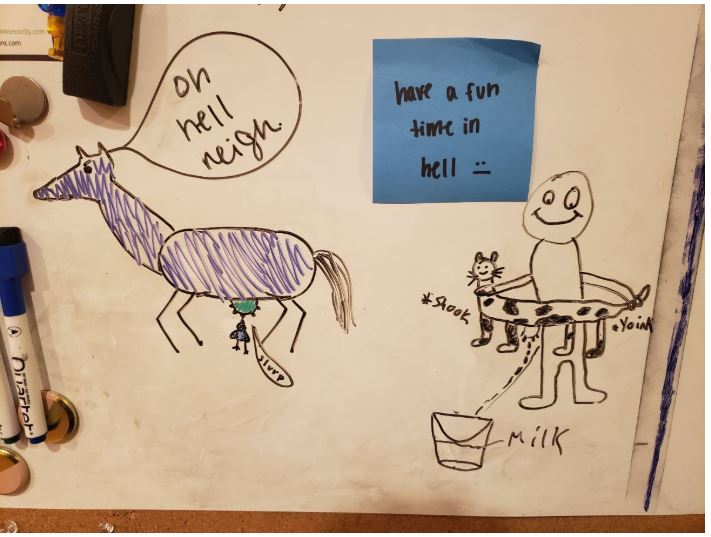 Did you know my cat fetches? We have a billion of these little soft glitter-ball toys and he’ll drop one at your feet so you can throw it for him. We all think it’s the cutest thing, 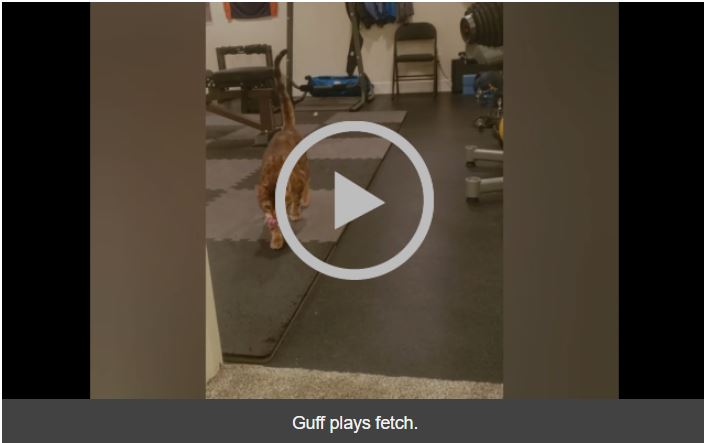 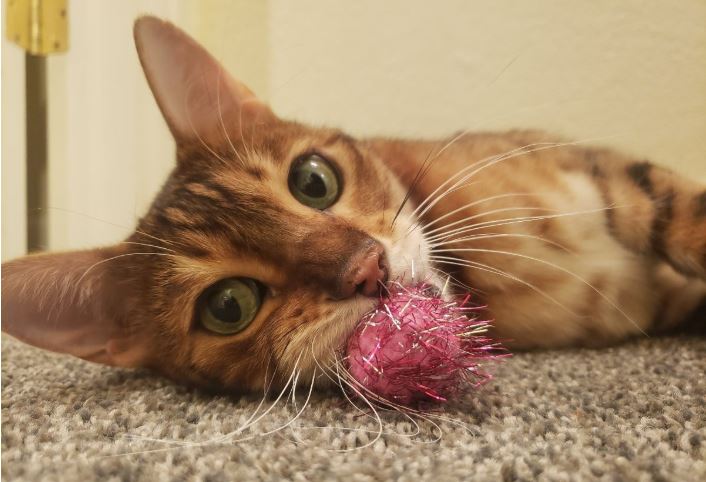 And Finally, What’s In My Backyard?

So far my backyard wildlife cams have spotted squirrels, rabbits, neighborhood cats, raccoons, mice, birds, and even a bobcat.

This guy started showing up this last month. We’ve named him Silas. 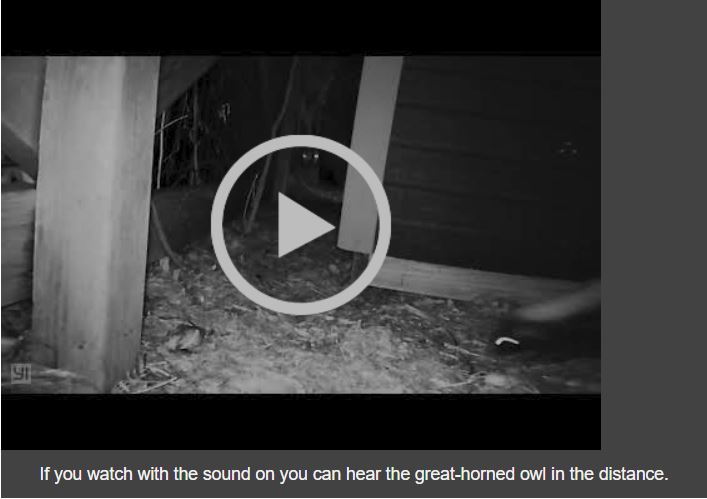