All About the Mood.

Storytelling is 20% idea and 80% mood. When I set out to write a story, I never have a fully formed vision of what the plot will be, but I know how I want the story to feel. Of course, moods shift scene to scene throughout a novel, but there should be one pervasive mood that shines through, usually punctuated by the end of the story. I don’t always feel this when reading books, which doesn’t mean the author necessarily did a bad job with their storytelling, but perhaps they put too much focus on plot instead of mood. A moodless story is forgettable. A moody book burrows under your skin.

When I set out to write The Dead Girl in 2A I had a strong sense of mood and a very incomplete sense of plot, perhaps more so than with any other book. I wanted this to be my most emotional story, the most contemplative, while still possessing a strong narrative pace, plot twists, and biting suspense. I knew I wanted to write about memory, a topic that has threaded lightly through every book of mine since my father passed from Alzheimer’s at age 69. In The Dead Girl in 2A, I wanted to face memory head on, extracting all the different moods that memory (or lack thereof) elicits: comfort, fear, desperation, yearning, paranoia, hopefulness. Hope was what I wanted to shine through at the end, out of the darkness of all that surrounds it.

Once I knew how I wanted this book to feel, I set about plotting the story, which for me consists of only thinking up the opening scene. Once that first scene is written, I spend the rest of the book figuring out what that scene means, wrapping the entirety of the story in the moods I’ve selected.

It didn’t take long before that opening scene came to me, and it exists in the finished book much as it did the first time I wrote it two years ago:

A man and a woman sit next to each other on a plane. First class, seats 2A and 2B. They each have a sense of knowing the other. Viscerally. So much so, even each other’s smell is familiar. On their flight from Boston to Denver, they try to figure out what they have in common, finding little except they have no memory of their childhoods and they each had a visit with a strange man in the past year who promised them a way to regain their memories.

As the flight descends into Denver, the woman makes a startling confession: she plans to kill herself deep in the Colorado mountains. She disappears in the crowded airport, leaving the man confused, desperate, and with a profound sense of responsibility to understand their connection.

That was the opening I gave myself to work with, then spent nearly 14 months figuring out the puzzle of how the two seatmates knew each other. I love how it turned out, and I hope you do as well. If nothing else, I’m happy if it makes you feel hopeful by the end.

Goodreads Reviewer I Want to Hug

“After reading this novel I too even have a better sense of what my life means and what I would like my purpose to be while I am alive. Overall, I would highly recommend this novel to not just a person who loves mysteries or thrillers but for anyone who needs to be inspired.”

I’m beyond excited to announce Mister Tender’s Girl has been nominated for a 2019 ITW Thriller Award. The ITW is the largest global thriller-writer organization, representing more than 4,500 members from 49 countries and 3.2 billion books in print. ITW membership features the biggest names in thriller/suspense fiction, so to be nominated for a Thriller Award is, to me, as big as it gets. I’ve been attendingThrillerfest for years (back before I was even first published) and it’s been truly a pleasure to develop great relationships and bonds with writers from around the world.Winners will be announced in July at Thrillerfest in NYC.

Calypso, David Sedaris (2018, Little, Brown).  You know, I’d never read David Sedaris before. I’d heard his name but didn’t really know who he was. Calypso was an impulse buy after I read the phrase “cheerfully misanthropic stories” describing it.  But even after buying it I still didn’t dive right in. The guy writes personal essays about middle age, after all, and I wasn’t sure I could relate. But then, I realized, goddamnit, I’m turning 49 this year. I am the exact demographic for this…

It took a bit to get into the book. It’s dark. Cynical as hell. Biting funny. And after those first few stories, as I felt I finally got an idea of who Sedaris was, felt I’d established some kind of relationship, the words seemed to flow more easily, the humor packed more of a punch, and the deep sadness that coats each story became more sweet. By the end I wanted to know more about the life of Sedaris because, being the middle-aged bastard I am, I started to relate. Except for the scenes with the snapping turtle. Those were just messed up.

Mad Men (2007-2015, AMC). I watched Mad Men when it first aired in 2007. It was a summer release, when most other shows back then were on a break, and it was AMC’s first series. I wasn’t immediately pulled in…it was a slow burn. But somewhere around the 7th or 8th episode, I was hooked. I watched all the way through the series finale, and recently I found myself wanting to re-visit the show (which I never do with a dramatic series, Breaking Bad and LOST notwithstanding).

A couple thoughts on watching it a second time through (I just made it past season two): First, the sexism is even more brutal than on the first watch. In 2007 it definitely stood out, but watching the casual denigration of 1960’s women in 2019 is mind-blowing. Those scenes serve the honesty of the show and the time period, but I wonder if Mad Men–historically accurate as it is–would get greenlit as a series today. I’m not sure. Second, the show is as deep of a character study as I think you’ll find anywhere on television. Aside from the mesmerizing sets, outfits, and photography, the character development is what sets Mad Men apart from everything else. Each character is deep, rich, and beautifully flawed. There are no throwaways here. No forgettable guest stars. If someone has any significant screen time, we’re going to find out a lot about them. It’s a show worth watching for the sheer entertainment of it, but, for me,  it’s also like taking a class on character interaction, dialogue, gestures, and arc. A master class, because Mad Men performs each of these things at the highest level.

This photo below is from March. My kiddos standing beneath a giant Sequoia in Yosemite. 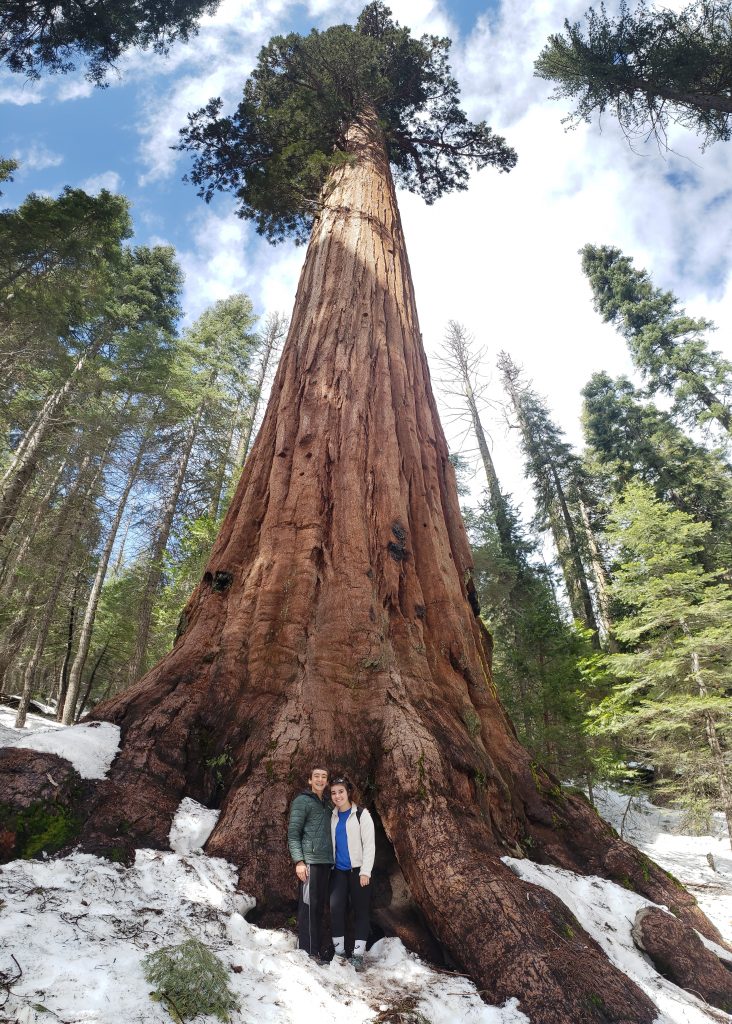 Apropos of nothing, I’m sharing a passage from the most recently written page of my work-in-progress. 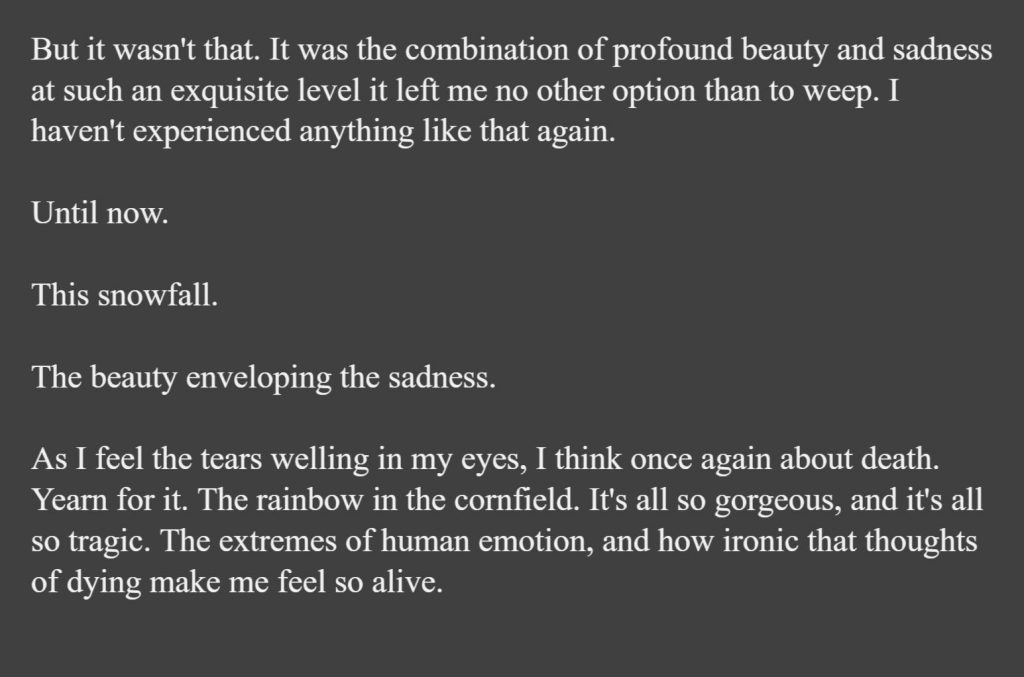 My in-home security camera caught the scene of my two kids goofing off, and then Ili hits Sawyer on the butt, causing him to trip and face-plant on the ground. You can hear me asking if he’s okay, while Ili is laughing so hard she’s wheezing.  Sawyer’s slightly off-screen when he falls, but the sound his body makes hitting the floor is amazing. 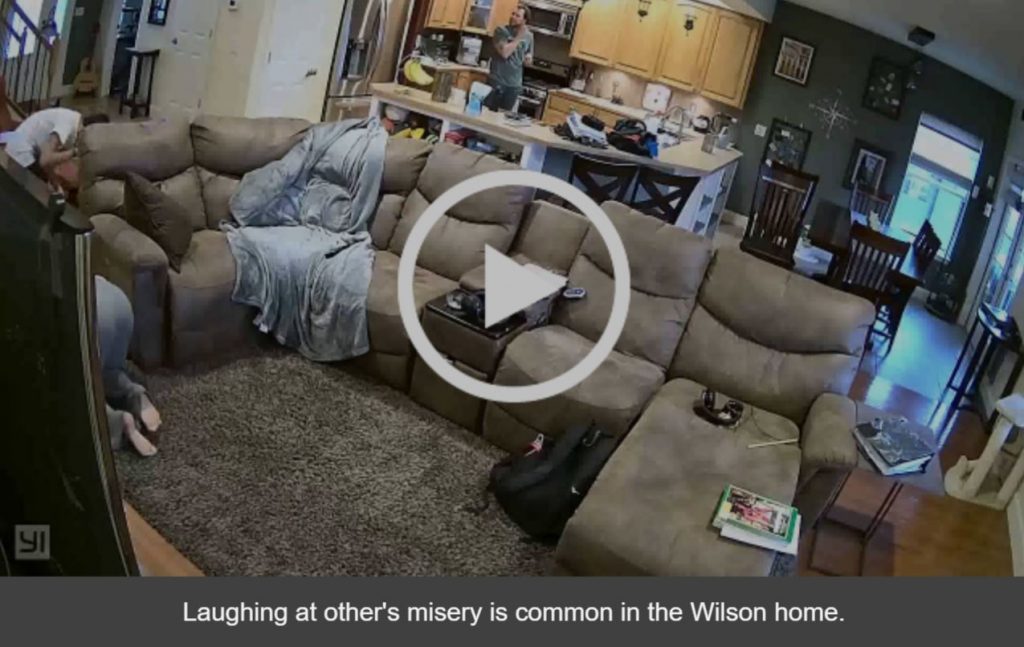 I went away for spring break so Guff had a pet-sitter. Here he is trying to rip her arm off. Isn’t he cute? 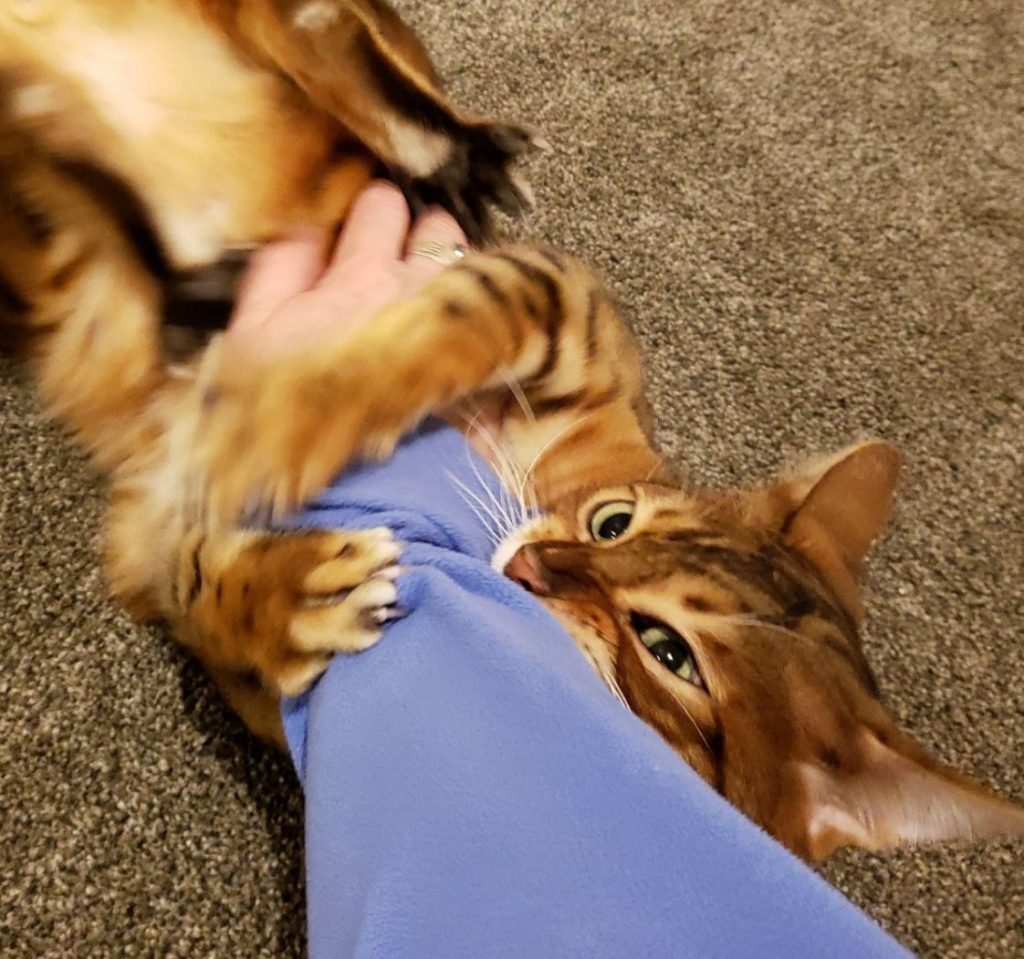 The bobcat is back! And this time he has a run-in with Silas the skunk. My obsession with my backyard cams in borderline unhealthy, but I don’t care. This shit is cool. 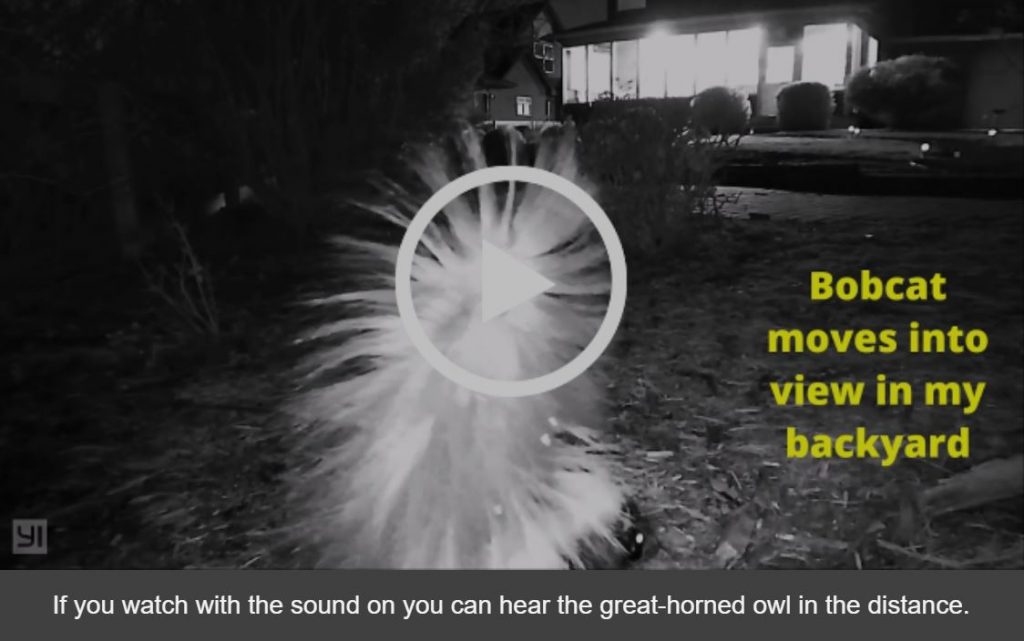